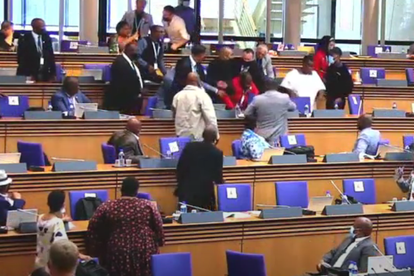 Banzi Dambuza won’t want to watch this back: The combative EFF councillor ended up getting booted out of a Cape Town Council meeting on Thursday, and there was nothing graceful about his exit.

Dambuza raised his grievances with Speaker Felicity Purchase, whom he accused of failing to properly count the votes registered in the house, for Cape Town’s Integrated Development Plan.

Purchase was lambasted for trying to ignore the EFF’s objections, and there were demands for a re-registration of votes. When the speaker tried to move on, all hell broke loose in the local Parliamentary building.

Dambuza was left to swing fists and bang tables, after Purchase called security on him. At least three officers attempted to drag the EFF councillor out of the sitting, but he clung on for dear life – kicking and screaming as he went. His comrades in red overalls also got involved, with one hitting a guard summoned to deal with Mr. Dambuza.

(Skip to 1:59:00 if the video doesn’t automatically take you there)

Something in the water?

The exchange wasn’t a pleasant one for any politician in attendance, and the speaker soon called for a meeting with all party whips once the entire charade had calmed down. But there was a comical caveat to that.

Who do you think the EFF’s chief whip is in Cape Town? That’s right. Banzi Dambuza. So after he was pulled from pillar to post and ejected from the hall, he then had to go and meet with his opposite numbers outside.

This isn’t the only argy-bargy we’ve witnessed from an EFF councillor this week. One Red Beret in Richards Bay landed some hefty punches on a rival from the ANC, but thankfully, he failed to do any serious damage.

25/11/2021
KZN
POLITICAL #ASAULT
Mayoral election in the uMhlathuze municipality in Richards Bay descended into a fight when an EFF councillor allegedly punched an ANC councillor in the face. pic.twitter.com/pu9UFuzje0