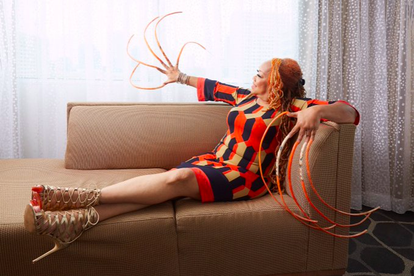 Ayanna Williams, who held the world’s record for longest nails grown by a woman, finally clipped her fingernails after 30 years. Photo: Twitter/@GWR

Ayanna Williams, who held the world’s record for longest nails grown by a woman, finally clipped her fingernails after 30 years. Photo: Twitter/@GWR

Imagine doing everyday activities with fingernails of 733.55cm long. That’s exactly what a Texas woman in the US did for three decades.

The woman who held the world’s record for longest nails grown by a woman finally clipped her fingernails after 30 years.

According to Guinness World Records Ayanna Williams broke the record for the world’s longest fingernails in 2017, when they measured nearly 19 feet long (576.4cm).

A MANICURE TOOK UP TO FOUR BOTTLES OF POLISH

Before cutting her nails last week, Williams took a final measurement that came to 24 feet (733.55cm). Her manicure took three to four bottles of nail polish which reportedly took a few days to complete.

Williams reportedly got the task done at a dermatology office in Fort Worth, Texas, where an electric rotary tool was used for her first nail cut since the early 1990s.

According to Guinness World Record, Williams broke her own record for the longest fingernails on a pair of hands (female)  with a new length of 733.55 cm (24 ft 0.7 in), since letting them grow from their initial confirmation in 2017.

FINGERNAILS WILL BE ON DISPLAY AT MUSEUM

Williams has reportedly dedicated over 28 years to growing her nails. In a way, the feature has become a key part of who she is.

“With or without my nails, I will still be the queen,” Williams told Guinness. “My nails don’t make me; I make my nails!”

Until now, simple tasks such as washing the dishes and placing sheets on her bed was something Williams could not do. But now with her shortened manicure, she’ll be able to do a lot more with ease.

According to Guinness, her fingernails will now be preserved and on display at the Ripley’s Believe It or Not! Museum in Orlando, Florida.