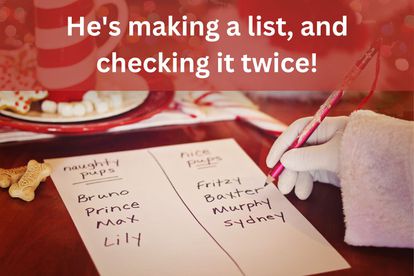 It’s time to see if you are on the naughty or nice list, 4 December is Santa’s list day. Image: Pixabay

It’s time to see if you are on the naughty or nice list, 4 December is Santa’s list day. Image: Pixabay

Are you wondering if you made it to Santa’s nice list, or are your suspicions high that you are stuck on the naughty list this year?

It’s time to find out because 4 December is Santa’s list day.

How did Santa come to be?

The concept of Santa Claus bringing gifts to children is thought to have originated around the 4th century BC.

This happened in what is now modern-day Turkey.

As stories are told, a religious man, called Saint Nicholas, was kind enough to give children gifts.

Throughout history, Nicholas has been the patron saint of many countries.

The Netherlands seems to be the place where many cultural beginnings led to Santa Claus.

The feast of Saint Nicholas was celebrated every year by parents leaving presents out for their children, who assumed that the presents came from St. Nick.

Eventually, this type of folklore developed into Santa Claus as we know him today.

The concept of lists

It wasn’t until many years later that the concept of Santa’s List was born.

Nobody knows where the idea came from, but it could be related to the song Santa Claus is Comin’ to Town.

The song, which was first recorded in 1934, has been extremely popular for many decades and has been covered by dozens of different artists.

If you don’t like the idea of Christmas creeping closer with each day, don’t fret, here are a few other occasions to celebrate today:

However you choose to celebrate, remember to make the best of the day!