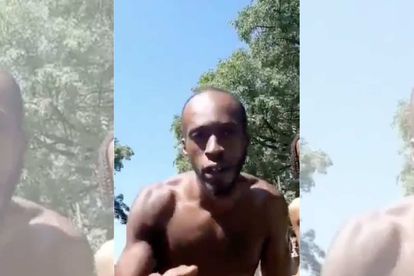 A video posted to Twitter in the first week of February has gone viral under the hashtag Northcliff Challenge after a man and his female companion decided to take to the streets of Johannesburg naked.

As if that wasn’t shocking enough for people passing by, the man also claimed to be “Jesus” reincarnated and asked to be taken to the affluent suburban area of Northcliff, hence the “Northcliff Challenge”.

The video has caused a storm on social media, making the “Northcliff Challenge” trend. Believe it or not, some South Africans have not shied away and have even uploaded videos of themselves going starkers in solidarity with the couple.

Warning: The content contained within this article features graphic imagery of a offensive nature which some readers may find disturbing.

Watch: Naked man asks to be taken to Northcliff

What can be seen in the Northcliff Challenge video

In the Northcliff Challenge footage captured by a motorist in Johannesburg, a man and a woman can be seen taking a casual walk — stark naked.

The driver calls out to them, asking them if they’re following a certain religion.

The man responds: “I am Jesus. I need a lift to Northcliff so I can become the king. Are you going to become the first servant?”

The female driver responds: “Oh my gosh!” as the man’s naked female companion steps into full view of the camera.

The man continues: “They told me the clothes are real and I’m born here, and I’m wearing this filth. This is my skin. Are we going to Northcliff?”

“No, I’m going this way,” the woman says. The man then responds by saying: “Are you saying no to Jesus?”

“Yes, he’s here. And Jesus is black, not white. Are you taking him to Northcliff? This is your last chance,” said the man.

He then counts down from five to one, before they walk off.

Man claiming to be Jesus admitted to hospital

According to Gauteng police spokesperson Captain Mavela Masondo, the man in the Northcliff Challenge video was admitted to the Helen Joseph Hospital, in Johannesburg, and the woman was sent into the care of her family.

“We are waiting for a report from the hospital that will determine if these people [the man] suffer from any psychological disorder or illness,” said Masondo.

When asked why the woman was not kept at the hospital for psychological treatment along with the man, Masondo said: “The medical practitioners or hospital would be in a better position to answer that question”.