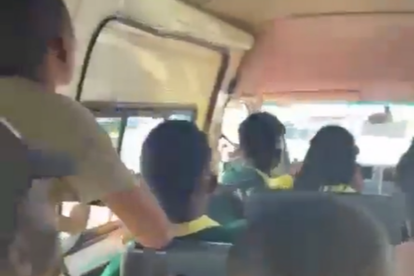 Very few silly road distasters will top this one in 2022. Image: @Callmethaboo2nd / Twitter

Very few silly road distasters will top this one in 2022. Image: @Callmethaboo2nd / Twitter

This school kids’ driver surely went straight to the police cells. In a video posted on Twitter, “Gadaffi” is seen halted by a traffic police vehicle before smashing into it. Yebo, that is exactly what he did.

The video, which drew nearly 10 000 engagements on Twitter as of Wednesday night, is believed to have happened in Pretoria.

It begins with the sight of school learners packed inside a Toyota Quantum minivan. Suddenly, a Gauteng Metro Police VW Polo with a loud siren paces past to stop the school kids’ ride.

Before anything else followed, the man behind the wheel, which the learners are heard referring to as “Gadaffi” simply crashes into the traffic officers’ vehicle not once but two times.

You just have to see this incredible drama and chaos with your own eyes to believe it.

As with most random viral videos on social media, this visual story ends abruptly to leave us too intrigued and with a thousand questions.

In a related mess, a Volkswagen driver has made a meme of themselves on Wednesday, after they smashed a brand new car right into the store front of a dealership in Durban.

The exact details aren’t too clear as it stands, but it’s believed the person was a customer at the dealership they crashed into. A photo taken at the scene shows that the car collided with the windows from the inside.

It’s likely that this calamitous motorists was eager to test-out this new motor – and set-off way too prematurely. Either way, the impact has been devastating for the dealership, which is now looking at a hefty repair bill. Read the full story here.