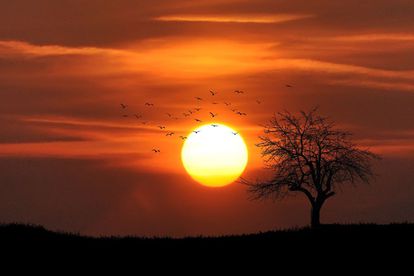 A new satellite image released by NASA this week shows the Sun with an apparent ‘smile’.

NASA’s Solar Dynamics Observatory captured the image of the Sun.

The programme works to understand the changes in the Sun’s radiation output, reports Business Insider.

Taking to Twitter, @NASASun shared a pic of the smiling Sun with the caption:

“Today, NASA’s Solar Dynamics Observatory caught the Sun “smiling.” Seen in ultraviolet light, these dark patches on the Sun are known as coronal holes and are regions where fast solar wind gushes out into space.”

What caused the ‘smile’?

The darker areas that form the Sun’s ‘smile’ are called coronal holes. The outer layer of the star is known as the ‘corona’.

While coronal holes can occur at any time on the Sun, they can’t be seen by the naked eye or a home telescope.

They are only visible in X-ray light and ultraviolet reports LiveScience.

Spaceweather.com explains that the coronal holes on the Sun could be a sign that geomagnetic storms could hit Earth’s magnetic field soon.

In other space-related news, it was previously reported that NASA’s Perseverance Mars rover has detected its highest concentrations yet of organic molecules, in a potential signal of ancient microbes that scientists are eager to confirm when the rock samples are eventually brought to Earth.

While organic matter has been found on the Red Planet before, the new discovery is seen as especially promising because it came from an area where sediment and salts were deposited into a lake — conditions where life could have arisen.

Organic molecules — compounds made primarily of carbon that usually include hydrogen and oxygen, but also at times other elements — are not always created by biological processes. Read the full story here.