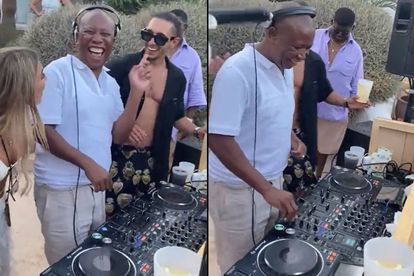 As we know, Economic Freedom Fighters (EFF) leader Julius Malema is currently on holiday in Ibiza, the Spanish Island, which just so happens to be one of the party capitals for European music lovers – and those further afield.

The details about Malema’s Ibiza trip remain scant. However, we know he was spotted with renowned local DJ duo, Major League DJz and a few video clips of the opposition party leader enjoying himself have caused a bit of a stir among South African social media users.

In a recent clip, Malema is seen behind the decks with a broad grin on his face while a small crowd dances to the music.

The EFF “Commander-in-Chief” recently appeared on Metro FM in June and played a live guest mix on Tbo Touch’s The Touchdown.

As previously reported, Malema’s set was well-received. “Listen, DJ Juju can do this. I have to give him 10/10,” wrote one Twitter user.

Prior to the radio station appearance, showed off his skills at the popular Konka nightclub in Soweto on Sunday, 14 November 2021.

The EFF is planning a massive bash to celebrate its ninth anniversary on 30 July. The party’s Secretary-General Marshall Dlamini visited the venue, Dr Molemela Stadium in Bloemfontein, on Friday to assess its state of readiness.