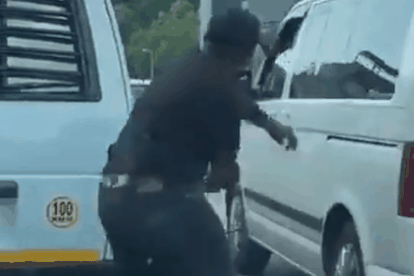 A taxi driver in Johannesburg lost his cool in dramatic fashion this week: He took matters into his own hands following an apparent disagreement with a fellow road user. In a 15-second video, the disgruntled motorist arms himself with a sizeable house-brick as the road rage tension boils over.

The clip was uploaded online earlier on Thursday. It has already been viewed thousands of times, and was picked up by anti-crime advocate Yusuf Abramjee. He confirmed the incident took place on Corlett Drive, which is on the M30 near Illovo and Sandton.

In the footage – captured by a concerned motorist who was stuck behind the taxi – we see the taxi driver emerge from his vehicle and approach a white Volkswagen minivan. He aggresively knocks on the passenger side window, before using a brick to hit the glass twice.

The victim hastily drives off through the queuing traffic in a bid to reach safety. Road rage gets the better of this enraged Joburger, and he ends up throwing the brick at the windows of the speeding vehicle. Amazingly, the glass doesn’t even flinch, and remains unbroken. Elon Musk should use it for his cyber-truck.

We are yet to get confirmation that there will be a police investigation into this shocking fracas. However, a number of users reacting to the video on Twitter pointed the finger squarely at the taxi industry. There are now growing calls for Santaco to properly regulate the people who are hired to drive these motors.

@SA_Taxis reign on your driver's, hooligans must not be allowed to be on the road

This is cos govt allows the taxi lawlessness to go on.
Dec is over, back to NORMAL @AsktheChiefJMPD