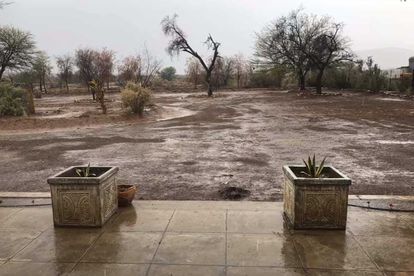 In Cape Town’s battle to stave off the drought, many areas have staged an incredible recovery. However, one part of the Western Cape has continued to struggle despite improvements elsewhere. The Karoo and its surrounding regions are still experiencing a terrible drought – so rainfall like we saw on Sunday feels like a gift from the Gods.

Over the weekend, flash floods and heavy rain battered the remote locations. Some places received a 20mm rainfall within 30 minutes, causing streets to flood and roads to be completely blocked off.

With the heavy advent of rain, it sparked some of the local geographical features into life. It’s been reported that the Keisiesriver – which has laid dormant since 2015 – have now started flowing again. A user-uploaded video shows the gushing flow of water push debris out of the way, as the revived river reclaims its former glory:

This is a textbook flash flood in the Keisiesriver in the Western Cape yesterday. This river is flowing for the first time in 3-4 years. Video sent in by Dana Du Plessis. pic.twitter.com/VjxJ2nLmfp

Beaufort West has become the poster child of the drought struggles in this part of South Africa. So it came as a huge relief that the rain passed through the town on Sunday. Flooded fields and persistent showers proved to be the enduring images of the day, with the much needed rainfall making its mark:

Dams in the Karoo

The rainfall comes as the start of summer creeps closer. Dams servicing the Karoo stand at just over 20% full – a number likely to change after this weekend. Nonetheless, places like Beaufort West in the Gouritz catchment will be all-too-aware that more rainfall is needed to drag them out of the doldrums.

Entire dams have run dry, with charitable intervention needed to keep the taps flowing in this majestic part of the Western Cape. Water may be scarce here, but the community spirit certainly is not. These timely showers may just provide the help farmers, business-owners and residents desperately need.