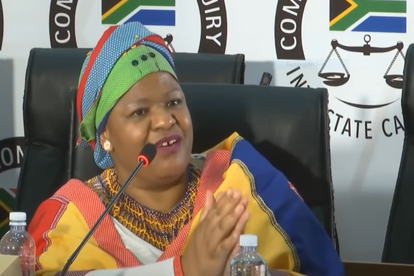 The State Capture Commission can sometimes make for television gold, which is no doubt a welcome relief for South Africans who seek an occasional break from the finger pointing and usual question dodging.

Well, another witness who was in the hot seat was South African Airways’ (SAA) former head of procurement, Nontsasa Memela. She was grilled over suspicious property transactions involving another unusual character who once testified, businessman Vuyo Ndzeku.

She claims Ndzeku paid R2.5 million for land belonging to her mother, but that they agreed the funds would go towards her account and not the elderly woman.

As if that wasn’t confusing enough, Memela said her mother then “donated” R1.5 million to go towards her Bedford View home. She said approximately R800 000 of the money which had remained, was used towards helping her mother renovate her house.

This prompted evidence leader advocate Kate Hofmeyr to ask Memela if she would be able to point out on her bank statements, transactions which would prove the funds were spent on a home improvement project, as she had claimed.

Then suddenly, the cat got Memela’s tongue – she smiled nervously and stuttered like a kindergartener on their first day.

“But chair … but chair …,” she said before reaching for a bottle of water.

How is she linked to Ndzeku?

A United States-based company, AAR Corporation and a company called JM Aviation, of which Ndzeku was a director, received a more than R1 billion tender to supply components in 2016.

Despite this, she insists she was not conflicted and was not influenced to award the contract to Ndzeku and his business associates.

“I played my role to the best of my ability. But where I have to answer on behalf of the acting CEO as if I have the power to influence, no I did not have any influence,” she said.