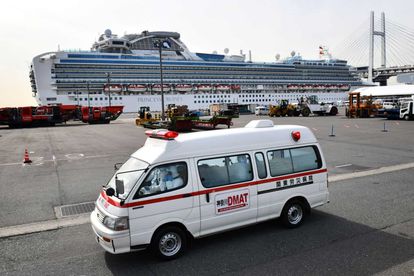 Tai chi, Bible study, karaoke and dancing with the “Dive Duo”: That was the entertainment promised passengers when they boarded the Diamond Princess.

But an outbreak of the coronavirus has left 2 600 guests confined to their cabins and searching for ways to pass the time.

So, facing at least 14 days of quarantine in Japan’s Yokohama after 20 passengers tested positive for the virus, holidaymakers are coming up with innovative ways to quell the boredom as their dream cruise turns into a nightmare.

Pranking the crew and TV overload

One Japanese passenger posted on Twitter that she had tried to prank the crew by greeting them wearing a seaweed face pack.

“I decided to put on a short comedy performance for the crew members delivering meals. I’m waiting for them with seaweed on my face… but I wonder when they are coming. Yesterday the lunch arrived at 15:00,” she said, before delivering a crushing blow.

“Lunch arrived. My comic face didn’t get any laughs.”

Matt Smith, a 57-year-old passenger, told AFP that the cruise operators had gradually increased the TV options to stave off boredom for those trapped inside their cabins.

“They’ve always had some live TV channels and then some on-demand content movies and TV series. And since they announced the quarantine, they’ve added a number of live TV channels, they got them from around the world,” he said.

One passenger enthusiastically tweeted: “I can’t get enough of these crazy cake shows.”

But the choices were not to everyone’s liking. “Also watched ‘Dumbo’. Kinda boring for me,” complained one passenger on Twitter.

If you think being trapped in a cruise ship cabin is bad, imagine trying to entertain a six-year-old boy at the same time. That’s the fate confronting Yardley Wong, who is also documenting the experience on social media.

She posted a picture of her son pulling up the sheets on his bed with the caption: “Playing hide-and-seek in a small cabin. #killtheboredom.”

Another parent posted a picture of an “entertainment pack” for children, with crayons, colouring and a (play) face mask.

Sudoku, crosswords and word searches are also being provided, along with playing cards — presumably Patience for the solo traveller.

Others are finding entertainment in the most mundane of activities, like changing the sheets and doing the laundry, as well as making a careful choice of what to select for meals.

More recently, some passengers — mainly those in inside cabins, without access to a balcony — have been allowed up on deck under strict conditions.

Wong published a video of people dancing with joy as they frolicked in the sunshine, saying “I’m so excited, I just can’t hide it” and “so nice to breathe fresh air”.

Others have just been gasping for their favourite tipple as the mini-bar quickly runs dry.

British passenger David Abel, who has become a minor celebrity with his Facebook postings from the ship, implored the captain to personally deliver him a glass of whisky.

“I take Talisker, 10-year-old single malt, no ice, no water. It would be fantastic if that could be arranged,” he laughed.

Another wag hung a sheet out of a cabin window, with the plea: “SOS, I need a Corona beer.”

A more risque option emerged on Friday, as an adult webcam site announced it would be offering its services free to those on board “in an effort to keep their minds off the coronavirus and to help with the boredom”.