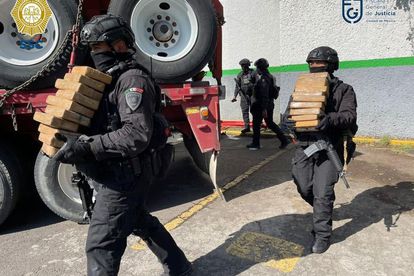 Mexico City authorities said they seized 1.6 tonnes of cocaine Tuesday believed to be from Colombia, describing it as the largest such discovery in the capital.

Police found the drugs in hidden compartments in two trailers on a highway on the edge of the city, the capital’s security chief Omar Garcia Harfuch said.

It was “the largest seizure of cocaine in Mexico City by far,”

According to initial investigations, the shipment arrived by sea from Colombia to Mexico’s Pacific port of Puerto Escondido.

Some of the cocaine was believed to be destined for distribution in the capital and some of it in the United States, Garcia Harfuch said.

It is the second major operation targeting drug cartels in Mexico City in July.

Two weeks ago, police arrested 14 suspects and seized weapons and drugs in the south of the capital.

Most those detained are being held on suspicion of belonging to the infamous Sinaloa cartel.