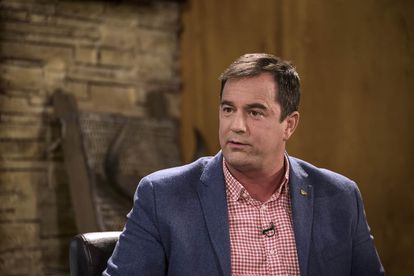 In a bizarre turn of events on Wednesday, DA interim leader John Steenhuisen was halted upon his arrival at the National Assembly by two SAPS officers – and he’s taken to Twitter to express his frustrations. The veteran politician was unable to take his seat for the Budget Speech delivered by Tito Mboweni.

Why was John Steenhuisen not at the Budget Speech?

The exchange took place just before 14:00, as elected representatives made their way to Parliament. It’s unclear how exactly this all panned out, but we understand that there was an issue with ID documents.

A representative of Parliament was sent to speak to John Steenhuisen and the SAPS officers, in a bid to resolve the conflict. However, no agreement could be reached between the warring parties.

Even the EFF took their side…

Natasha Mazzone – the DA’s chief whip in Parliament – rose on a point of order after the Budget Speech had finished, to log a complaint with Speaker Thandi Modise who agreed to investigate the matter further. Even the EFF’s Mbuyiseni Ndlozi was in agreement, saying there is a terrible “securitisation” of Parliament.

She says that DA leader John Steenhuisen was prevented from entering parliament.

The DA leader has jumped online to register his disdain with the whole affair. He claims he was “harassed” by security staff and police officers – and even ended up tangling with someone in the comments:

“Another low point in the South African Parliament, as members of the house are harrased by the SAPS and obstructed from attending to their duties.”

John Steenhuisen on his Parliamentary “rejection”

No, we went to court and won actually, but don’t let the facts get in the way of your narrative.