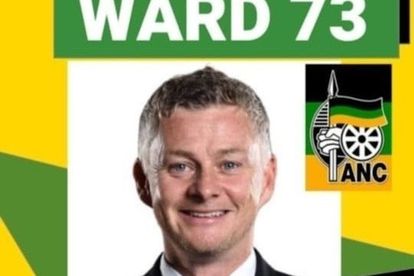 Just when it looked like things couldn’t get any more humiliating for Manchester United boss Ole Gunnar Solskjaer, Mzansi decided to kick a man when he’s down – by featuring him in a hilarious election poster parody for the ANC.

On Sunday, United crumbled to a 5-0 defeat at home to bitter rivals Liverpool. The performance has been described as one of the most embarrassing of all time from the Red Devils, and few are likely to argue with that.

Klopp’s side ran riot, but they were aided and abetted by a United team that was both comic and tragic in equal measure. For the millions of Man U fans across South Africa, it was torture. For the rest of us, it was a chance to shine.

The memes flying about social media and WhatsApp have all been class, and even the most ardent United supporter may have even raised a chuckle – after all, the only alternative left after yesterday’s humiliation would be to cry.

But the winner of the funny free-for-fall goes to this doctored election poster, which portrays Ole Gunnar Solskjaer as an ANC candidate contesting in the 2021 Local Elections: ‘Vote for Ole to stay’, reads the sign, claiming that he is ‘the people’s choice’. Eish, rival fans can be RUTHLESS when they want to be…

Ole Gunnar Solskjaer and the ANC – a match made in mockery?

After the derby day demolition, a new sub-genre of Tweets began to emerge – with multiple social media users comparing Solskjaer to the ANC and its senior cadres. If Ole’s at the wheel, he’s not heading anywhere fast…