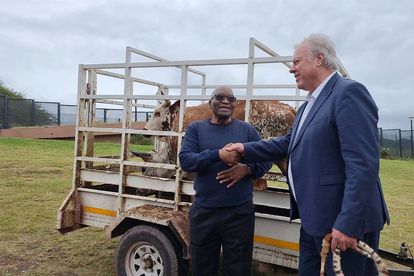 You can judge a person by the company he keeps, and Jacob Zuma’s latest acquaintance certainly comes with some baggage. Last weekend, the former president was pictured with Louis Liebenberg – leaving us with lots to unpack.

Who is Louis Liebenberg?

His name may sound familiar to some of you: He’s a high-profile businessman, who has been active in the mining, gold, and diamond industries. However, a number of accusers have labelled Liebenberg as a ‘conman’.

Several Facebook groups have been set up, allegedly exposing the Northern Cape resident as a fraud. It’s believed he has been part of several Ponzi schemes, which have illegally taken money from investors.

Louis Liebenberg has always fought to clear his name, but in an interview with Carte Blanche a couple of years ago, he made a stunning admission to the investigative team – plainly stating he DID dabble in illegal activities.

What is the relationship between him and Jacob Zuma?

They were pictured together earlier this month, in what appeared to be something of an amicable meeting. In fact, the pair were seen grinning and smiling with each other. Louis Liebenberg, meanwhile, brought a gift for Msholozi.

Two Nguni cattle were presented to the 80-year-old, who gleefully accepted the offering. What’s more, Mr. Liebenberg was granted access to Nkandla – a privilege that is very rarely extended to anyone outside of Zuma’s inner-circle.

For now, relations between the two are far from transparent. However, they seem close enough to exchange gifts and visit each other’s homes. Yet there is one particular wedge that could test this flourishing friendship.

Louis Liebenberg and the whites-only town

In 2019, another contentious businessman staked a claim for a new whites-only town in the Northern Cape. Adriaan Nieuwoudt, infamous for the failed ‘milk culture’ scheme, announced that he was building and financing the settlement of Eureka – with the expressed desire of ‘re-establishing the white race’ in Mzansi.

A year after this announcement, Louis Liebenberg was linked to the Eureka project – and even stands accused of trying to exploit investors by peddling his ‘Forever Gold and Diamonds’ business. The suspected swindler also tangled with the SA Human Rights Commission back in 2020, for posting his ‘racist’ impression of Cyril Ramaphosa online.

“We have reported the racist behavior of well-known diamond Ponzi schemer, Louis Liebenberg, to the SAHRC. Liebenberg is no stranger to controversy. He has joining forces with the founder of all-white ‘Eureka’ community in Garies, Adriaan Niewoudt. There’s no ethical validation for Liebenberg’s actions. He must be held accountable.”