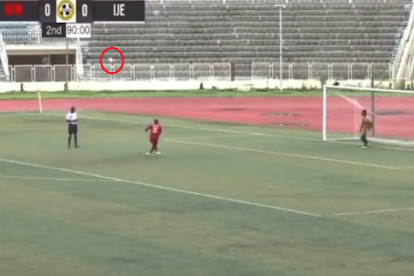 Good heavens, does it get more blatant than this? A soccer team in Nigeria is likely to face an investigation, after players appeared to THROW the match during the Ogun State Cup Final. Some penalties taken during a shoot-out went out for throw-ins, raising suspicion immediately.

Even the more polished efforts – where the ball trickles wide of the goal – seem dodgy as all hell. The Remo Stars side even tried to act as if they’d made genuine mistakes, and that hasn’t washed with social media users.

It won’t take a detective to work out that something went gravely wrong behind the scenes. Ijebu United, the other team involved in this fiasco, ultimately benefited from the bizarre situation… and these penalties have to be seen to be believed.

If this isn’t Match Fixing, then I don’t know what it is.

Why is Nigerian football like this? Why don’t we ever want progress??

This is Ogun State FA Cup final between Remo Stars and Ijebu United ????????

For those asking for the full video of the penalty shootout between Remo stars and Ijebu United , this is the second penalty taken by Remo star@PoojaMedia @Sabastinemma @IbkSports @OgaNlaMedia pic.twitter.com/YUzXihxIx4

Absolutely shamble from remo star fc at the ogun state fa cup final against ijebu United at otunba dipo stadium. This happens as the fa says there is no extra time after playing goalless draw at full time. Instead of forfeiting the match they decided to be playing the penalty out pic.twitter.com/okKV2GxzbT

Penalties were ‘act of protest’ against refereeing decisions

Although Remo Stars did deliberately miss their penalties – and had a goalkeeper stand motionless for the three he faced – this isn’t *technically* an act of match-fixing. Ibukun Aluko is a Nigerian football expert, and he explained that the stunt was a ‘mark of protest’.

Nonetheless, this unsportsmanlike conduct has left a very bitter taste in the mouth of local football fans.

“I found out that Remo stars players deliberately threw away their first three spot kicks, and their goalkeeper also remained motionless when the opponents took theirs as a MARK OF PROTEST for the unfair officiating in the game.”