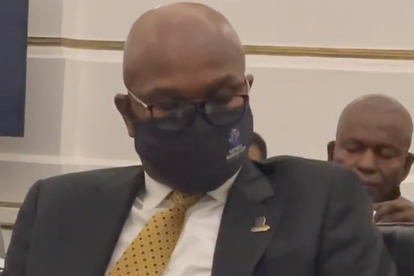 Ah, it’s always nice to see our elected representatives hard at work. Sports, Arts, and Culture Minister Nathi Mthethwa was, quite literally, caught napping during a session on Parliament on Tuesday – and an opposition politician managed to capture the bizarre moment on film.

Earlier this afternoon, Nathi Mthethwa seemed rather enthused by his work diary. He spoke about the significance of the session he was heading into, where a debate about Human Rights Day was being held.

Follow the @ParliamentofRSA procession as I will be participating in the Debate on Human Rights Day: Entrenching the Human Rights Culture in the fight against Racism, Xenophobia and other related intoleranceshttps://t.co/u3IBJS59Lg

However, he was soon caught off-guard by Leon Schreiber. The Shadow Minister for Public Works and Administration noticed that Nathi Mthethwa was struggling to stay awake. Seizing upon an opportune moment, the senior DA figure started recording his ANC rival while he was allegedly dozing off.

“Here is a member of Ramaphosa’s Poverty Cabinet fast asleep during a session of Parliament. The DA’s Motion of No Confidence in this Cabinet has never been more urgent…”

Here is a member of Ramaphosa’s Poverty Cabinet, Nathi Mthethwa, fast asleep during a session of Parliament. The DA’s Motion of No Confidence in this Cabinet has never been more urgent. pic.twitter.com/JV9XQuEFOg

As comical as this clip is, it will only provide more fuel for the DA’s fire. The opposition party are looking to remove ALL members of the Cabinet via a motion of no confidence next week.

Although the chances of success are slim, the DA-led campaign is expected to receive some support from other parties. A debate on ministerial performance will also be held on Wednesday 30 March – so let’s hope Nathi Mthethwa can keep himself awake long enough to participate in these proceedings.