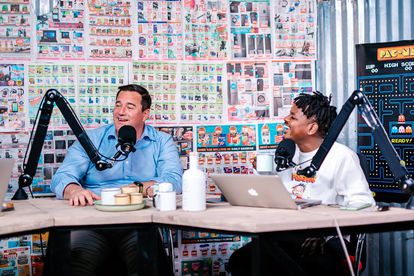 Controversial or comical? John Steenhuisen didn’t sugarcoat any feelings about his ex-wife while in conversation with MacG – Photo: DA / Twitter

Controversial or comical? John Steenhuisen didn’t sugarcoat any feelings about his ex-wife while in conversation with MacG – Photo: DA / Twitter

Well, that was unexpected! John Steenhuisen made his debut on the MacG-fronted #PodcastAndChill programme. Suffice to say, he certainly made a big impression on his hosts. However, it would be a comment about his ex-wife that caused pandemonium in the studio.

The DA leader was invited onto the show, just weeks after Julius Malema was grilled by the popular broadcaster. Determined to make a memorable appearance, Steenhuisen cut a very relaxed and laid-back figure. However, he still found time to lambast President Ramaphosa.

He accused Cyril of using the Phala Phala property as his ‘own personal bank’. It was here where $4 million in cash was founded hidden away – a discovery that is keeping the pressure piled on the ANC leader. Alas, it wouldn’t be Steenhuisen’s political views that sparked havoc.

The senior politician was asked by MacG to define what ‘roadkill’ is, as part of a segment on the podcast. He stunned EVERYONE when he replied by saying ‘it sounds a lot like my ex-wife’, before calling her a ‘flat chicken’.

Who is John Steenhuisen’s ex-wife – and who did he have an affair with?

In 2010, John Steenhuisen got divorced from wife Julie, after he was caught having an affair with the DA’s KZN spokesperson at the time, Terry Kass-Beaumont. He was the party’s leader in the province 12 years ago, and he also resigned from the role amid intense public scrutiny.

Julie, a fellow Durban native alongside John, mothered two of his children. Meanwhile, Kass-Beaumont was the partner of Michael Beaumont – a man who served in the DA before eventually joining ActionSA last year. If this is roadkill, Steenhuisen may well be the one behind the wheel.

The opposition leader seems to have won MacG over in recent weeks. Just last month, the firebrand entertainer told his listeners that ‘the time had come’ for a DA government, arguing that they would at least be the lesser of the two evils. Well, he didn’t *exactly* say it like that:

“Isn’t it time we gave the DA a chance? Don’t you think we’d have a better quality of life? I know people have reservations about them. Either way, if we’re going to get f***d, at least f**k us with lube. If we’ve got electricity, if the roads are working, if my kids are safe, it works.” | MacG

You can watch the full #PodcastAndChill episode with John Steenhuisen here