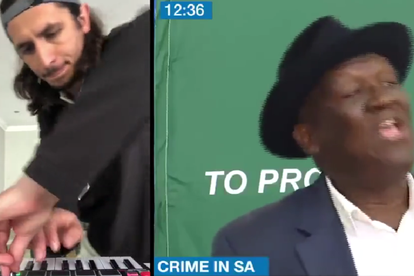 The track mercilessly mocks Bheki Cele, after he yelled at a critic earlier this week – Photo: Twitter / The Kiffness

The track mercilessly mocks Bheki Cele, after he yelled at a critic earlier this week – Photo: Twitter / The Kiffness

He’s only been given the Nkosazana Dlamini-Zuma treatment! Back in 2020, The COGTA Minister became an online sensation, after her warning about ‘when people zol’ got its very own dance remix from Max Hurrell. Flash forward two years, and Bheki Cele finds himself in the same boat.

Bheki Cele gets the meme treatment – and a new dance remix!

The Police Minister went viral for all the wrong reasons this week, after losing his cool at an engagement in Gugulethu. The ANC stalwart was questioned about his department’s performance – and the state of policing in general – over the past few years. And that’s when it ALL kicked off.

Ian Cameron, of Action Society, ended up getting an earful from Bheki Cele. The hatted politician screamed and shouted at his adversary on Tuesday, listing his struggle credentials and talking about his upbringing. However, that served merely as a starter for the main course…

Cele raised his voice even further, yelling “SHUT UP AND GET OUT” at Mr. Cameron. The jarring exchange eventually ended when the Action Society Director was forcefully removed from the building – a reaction that could land the Cabinet member in more trouble.

Alas, that iconic line has been given a new lease of life from The Kiffness. The acerbic artist is known for his parody videos, and when an opportunity as good as this arises, he wasn’t going to turn it down.

The dance remix has the potential to be an absolute floor-filler – and it gets extra points for referencing Arnold Schwarzenegger’s star-turn in Kindergarten Cop. As far as elite-level piss-taking goes, this is right up there – and even Siv Ngesi has given his approval!

So, if you’ve got 90 seconds spare and need a bit of a laugh as we crawl towards the weekend, indulge yourself in this political banger.