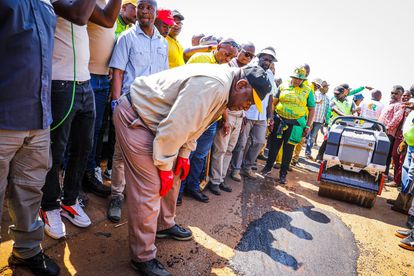 Not everyone is digging Cyril Ramaphosa’s latest photo op. The president has been ridiculed by his opponents this week, after he attended a ‘pothole’ patching in Delmas, Mpumalanga. However, critics are baffled by the work that was actually carried out.

With the 2022 Party Electives round the corner, Ramaphosa is keeping busy. Road infrastructure across South Africa is in dire need of improvements, the ANC leader got to work on Saturday. His use of heavy machinery seemed to impress the locals who gathered for the event.

However, the EFF are a little miffed with Mr. Ramaphosa. Speaking on Sunday, Julius Malema mocked the public appearance, questioning why potholes were being patched ‘when there are no proper roads’. Juju also wondered where his own ground forces were…

“Yesterday, Ramaphosa went to Mpumalanga. He was patching potholes on a gravel road. When you check, there is no road – because our people are taken for granted. Why? Because there is no one who stands up for our people.”

“Where is the EFF in Mpumalanga where Ramaphosa went to patch a non-existing pothole? Because the EFF should have been there and say ‘you can’t patch any pothole here/ there is no pothole here. We don’t have roads’.” | Julius Malema

It’s the type of behaviour we have come to expect from our politicians when there’s some sort of election round the corner. Ramaphosa is looking to secure the backing of ANC delegates in Mpumalanga, as he seeks to extend his term as the party’s head honcho.

As it stands, this province remains supportive of the president. And, if Ramaphosa does get ousted as president, as least he’s got a career as a road maintenance worker lined up…