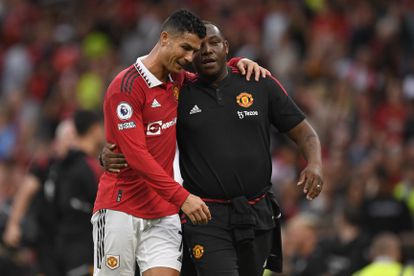 One of the greatest forwards to ever play the game… stood here with Cristiano Ronaldo -Photo: Twitter / @iDiskiTimes

One of the greatest forwards to ever play the game… stood here with Cristiano Ronaldo -Photo: Twitter / @iDiskiTimes

After a brilliant start to his coaching career at Manchester United, Benni McCarthy has become Mzansi’s major representative in the English Premier League. Now, with Chelsea FC looking for a new manager, some of our local football fans believe the Bafana Bafana legend can step-up.

Benni McCarthy has had a bright start to life as a manager. He enjoyed thrilling spells at Cape Town City and AmaZulu, before taking up his latest role as one of the forward coaches at Old Trafford. The super-striker has recently been praised for the impact he’s had at United so far.

However, his CV isn’t yet glittering enough to put him amongst the favourites – or even outsiders – for the Chelsea gig. Bookmakers are yet to give a price on the former Porto and Blackburn Rovers forward taking the reins at Stamford Bridge. Enquiries have been made, however…

@SkyBet @RequestABet Alright lads? Can we have some odds on Benni McCarthy taking over at Chelsea please? #BenniToTheBridge…

Brighton boss Graham Potter – a former coach of Percy Tau – is the odds-on favourite for the Chelsea job, priced as low as 1/4 on Wednesday afternoon. He has worked wonders with the South Coast club, and is seen as one of the best young bosses in the business.

But here in South Africa, one candidate is proving to be more popular than most…

Benni is available too ???? @ChelseaFC