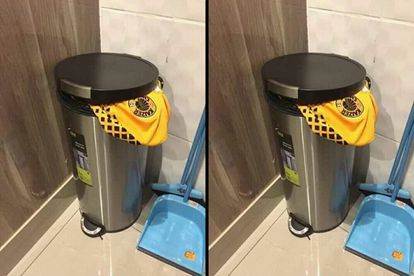 Now THIS is controversial. The City of Joburg has come under intense scrutiny on Tuesday morning, after it shared a Tweet mocking Kaizer Chiefs and its fans. Though some saw it as friendly banter, most found the account to be posting ‘in bad taste’.

Kaizer Chiefs fans trolled – by their own city officials!

Alongside Orlando Pirates, Kaizer Chiefs are one half of the iconic ‘Soweto Giants’. The long-running rivalry is a famous one in world football. On Saturday, Chiefs defeated Pirates 1-0, thanks to a wondergoal from the halfway line.

The Soweto Derby is an iconic fixture, and serves as one of Johannesburg’s greatest cultural assets. So when the City’s official Twitter account starts talking trash about one of the teams… it’s not going to go down too well.

The now-infamous post reminded Joburgers to ‘put their litter in a bin’, to keep the city clean. This was accompanied by a Kaizer Chiefs jersey sitting in a garbage can. The image has sparked hundreds of furious reactions, and earlier this morning, it was removed from the site.

Demands for ‘apology’ from City of Joburg

‘Unprofessional’, ‘outrageous’, and ‘distasteful’ were just some of the words used to describe the admin’s misjudgment on this issue. Of course, there’s nothing wrong with a bit of gentle ribbing between football fans – but official accounts for the city should be steering clear of it all.

Sports reporter Simon Burke proved to be one of the City of Joburg’s loudest critics on the matter. He also suggested that the CoJ should issue an official apology to Kaizer Chiefs, and acknowledge that their role is to ‘promote positivity’ for the whole metro.

“Can you imagine other great cities of the world turning on their sports teams like this? It is outrageous. Kaizer Chiefs deserve an official apology at the very least. Jokes aside, the City of Joburg should be promoting all things positive related to Jozi!” | Simon Burke