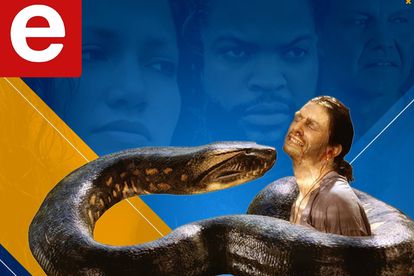 A promotional image for Anaconda, released by the network earlier this month – Photo: eTV / Twitter

A promotional image for Anaconda, released by the network earlier this month – Photo: eTV / Twitter

Oh great, now they’ll never take it off the air. The eTV network has released a statement confirming just how popular their decision to show Anaconda for the umpteenth time was with the viewers…

How many people actually watch Anaconda? Quite a lot…

Somewhat inexplicably, over 2.4 million people tuned in to watch the 1997 Hollywood blockbuster a week last Saturday. On social media, eTV announced the film was scheduled to air – sparking a backlash from our fellow netizens.

However, the proof is in the pudding for the network. They boasted a large audience share and one of the highest peaks of any channel for the night in question. Many of us may have ‘Anaconda fatigue’, but quite clearly, there are still plenty of people who can’t get enough of that damn snake.

Why is Anaconda always on TV?

Anaconda has a 4.8 / 10 rating on IMDB. It’s 37% rating on Rotten Tomatoes is even more damning. A strong cast – including Jennifer Lopez, Owen Wilson, and Jon Voight – can’t save the film from its own outright ridiculousness. But, rather inexplicably, it has become one of the most played movies on SA television.

But eTV schedulers aren’t swayed by the negativity, from either the critics or the public. They claim to have received feedback PRAISING their choice of movie, with one person saying they simply ‘cannot stop watching’.

eTV happy to stick with the tried and tested

So, there we have it. Anaconda is more popular than any of us could ever imagine. Sadly, with viewing figures like these, we cannot simply call pest control and have the thing to move. We fear it’s here to stay…

“The Anaconda movie flighted at 20:00 on eTV, and saw over 2.4 million fans tuning in on Saturday 15 January. The movie is an old favourite, and even though you know that snake is about to strike, you can’t stop watching. Some viewers commented; ‘we love it’, and ‘It might be old, but I keep watching’.”