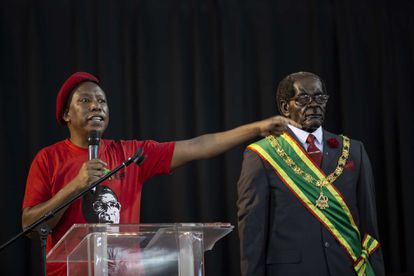 Leader of South African political party the Economic Freedom Fighters (EFF), Julius Malema, gestures while standing next to a wax model of late Zimbabwean President Robert Mugabe at a memorial service held in his honour in Soweto, Johannesburg on 12 September 2019 – Photo by Gulshan Khan

Leader of South African political party the Economic Freedom Fighters (EFF), Julius Malema, gestures while standing next to a wax model of late Zimbabwean President Robert Mugabe at a memorial service held in his honour in Soweto, Johannesburg on 12 September 2019 – Photo by Gulshan Khan

Ah, the perils of keeping a digital record of everything you say: Julius Malema has been trolled relentlessly this week, after some of his political opponents dug up a few old Tweets from his account – which reflect some very different views from the ones he holds now.

One stands out above the rest however, and that’s Juju’s take on immigrants from Zimbabwe coming into South Africa. Back in 2011, a post from his account lamented the border-crossings. He claims that a clutch of Zimbabweans were only entering Mzansi to have kids and take social grants, rather than find work.

Gone are the days when Zimbabweans came to SA to find jobs. Now they come to have kids so to benefit from social grants

Was it really Julius Malema posting, though?

As one would expect, supporters of Julius Malema have leapt to his defence. It’s understood that the EFF leader only took control of the @Julius_S_Malema account in 2012, which would suggest that the offending Tweet isn’t actually from him. However, there’s another twist in this tale.

The account was initially run by Jonathan Witt, and was only an imitation of the 41-year-old. However, he revealed to News24 that he was ‘quoting Malema verbatim’ while posting on the page.

“I didn’t think it would get this huge. I only started it because someone said I was like Malema and I wanted to prove them wrong. I merely started the account and began quoting him verbatim.”

Juju was once ‘much tougher’ on Zimbabwean immigrants

What is more, Julius Malema wasn’t always as accommodating towards Zimbabwean immigrants. Video footage – from around the same time the Tweet was posted – shows the former ANC Youth Leader telling migrants from Zim that they must ‘go back to their country’ and fight political oppression there.

This one is fake too? pic.twitter.com/XVx2Mq6RxI