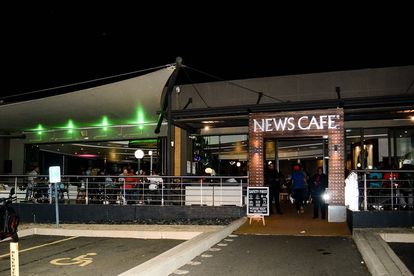 News Cafe has been in the spotlight this week, and SAPS have been forced to clear the air – Photo: Facebook

News Cafe has been in the spotlight this week, and SAPS have been forced to clear the air – Photo: Facebook

News Cafe in Woodmead has been attracting the wrong sort attention, largely thanks to two viral Tweets and one very unfortunate death. The popular Joburg nightclub was accused of all sorts over the past few days…

A pair of very popular Tweets, shared within 24 hours of each other, recount stories of how female visitors to News Cafe were drugged and then bundled into the back of luxury cars, during alleged kidnapping attempts.

These elaborate stories claim that an operation is in place, where everyone from security staff to taxi drivers are meant to be involved. The Woodmead night-spot stood accused of being ‘complicit’ in these so-called kidnappings.

What in God's name is going on at News Café in Woodmead? 😳 So, Friday night (29th) was my birthday, so my friends and I decide to go spend the night there. Cool, it's my first time there and I'm keen. Prior to this my mom tells my friend & I should be careful etc.

In January i went to Newscafe Woodmead, something i hardly ever do, i remember telling my cousin i spotted 3 guys 1 arab 2 natives Who paid special attention to females partying alone. I approached the Arab gentleman to try see what's his story. 2 minutes on he was gone…

However, all of these rumours have been busted – thanks to some good, old-fashioned police work. Gauteng SAPS confirmed on Thursday that neither of the women mentioned were actually kidnapped. Following an investigation, it transpired that both of the intoxicated revellers were picked up by their ‘next of kin’.

It’s quite possible that these vicious untruths emerged as a result of Kgalalelo Tolo’s death on Friday. The 33-year-old was initially reported missing, after last being seen at News Cafe. Although he also did not fall victim to a kidnapping, he was tragically struck down in a hit-and-run accident, shortly after he left Woodmead.

“Gauteng Police have taken note of the viral tweet about two women who were allegedly bungled into two sedans at a local night club in Woodmead. The validity of the tweet was investigated and it can be confirmed that the two women were not kidnapped, but in fact picked up by their next of kin – contrary to what has been said on social media.”

“In another incident, 33-year-old Kgalalelo Tolo was reported missing after he was last seen leaving the same nightclub at Woodmead last Friday. Unfortunately, further investigations revealed that Tolo was involved in a fatal hit and run accident while walking back to his place of residence. His next of kin has been notified.”