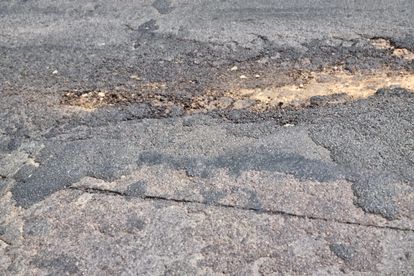 The R28 between Westonaria and Vereeniging is littered with bumps and potholes – just two years after its grand reopening – Photo: Supplied

The R28 between Westonaria and Vereeniging is littered with bumps and potholes – just two years after its grand reopening – Photo: Supplied

The absolute state of these potholes, man. Complaints have been formally raised by the FF Plus this week, after the rapid deterioration of the R28 route in Gauteng left some motorists at the end of their tether.

Is the R28 Gauteng’s worst road?

The worst-affected part of the carriageway – situated between Westonaria and Vereeniging – was subject to a major restorative project just over two years ago. The road connects the R28 to both the N1 and the N12, meaning that traffic volumes remain high throughout the year. Sadly, these commuters are all at risk.

Potholes for days – but the FF Plus is gatvol

However, this busy stretch of the R28 is now riddled with potholes, and the dire situation has put a number of drivers in some seriously dangerous situations. Anton Alberts, the FF Plus National Chairperson, has written to the Gauteng Government about this issue:

“The FF Plus has requested the Gauteng MEC for Roads and Transport, Jacob Mamabolo, to urgently investigate the maintenance work that was conducted on the R28 route between Hillshaven and the N1 junction to Vereeniging.”

According to the FF Plus, the regenerative work – which came to a conclusion in 2019 – hasn’t lasted very long at all. Motorists are suffering significant damage to their tyres, and a handful have even been targeted by robbers – after they were forced to carry out running repairs by the roadside.

“The R28 is riddled with potholes and the tar surface is crumbling a mere two-and-a-half-years after it was re-built and re-opened with great fanfare. The repair work on the potholes does not last long and potholes are increasing at an incredible speed, so vehicles frequently hit these holes and damage their tyres.”

“In many cases, more than one tyre on a vehicle is damaged and then motorists are compelled to seek assistance, which puts them in danger. Some motorists who had no choice but to change tyres have been robbed. Contractors using tax money to do substandard work that may claim people’s lives must not be tolerated.”

Complaints about the R28 route have been raised frequently over the last six months or so. The tarmacked carriageways have gone downhill fast, with some commuters describing how ‘scary’ travelling on this road has become.

R28 frm N12 to N1 potholes and it causing accidents