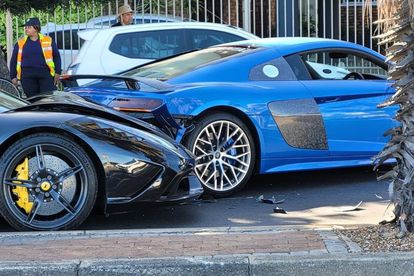 We’d love to say that’ll buff right out – but we would be lying! – Photo: Arrive Alive

We’d love to say that’ll buff right out – but we would be lying! – Photo: Arrive Alive

Ooft, now this appears to be an expensive collision. While we fully expect this Ferrari 458 Speciale to ride again, the repair bill is likely to be eye-watering. After crashing into the back of an Audi R8, it’s hard to tell who has come off worse.

The incident brought traffic to a standstill on Saturday morning. It also had the same affect on bystanders, who managed to get a glimpse of the very costly and mangled metal. Debris was eventually cleared from the road, and both vehicles were taken out of harm’s way.

Whereas the Audi R8 was rear-ended, the Ferrari 458 copped its fair share of damage too.

Ferrari valued at R11m caught-up in a crash

The Speciale is a ‘high-performance version’ of the 458 Italia Coupe, first produced in 2014. This enhanced model comes with finned side sills, a taller rear spoiler, and redesigned bumpers. The engine was revised, with power increased to 597 hp, and it also featured a vented bonnet.

Was there saw it happen. pic.twitter.com/uYIMSZGafY

Driver talks us through the damage

We’ve been in contact with the man behind the wheel of the Ferrari. Thankfully, no-one was hurt in this incident – but JP Van Der Spuy has described it as ‘an expensive morning’. You can say that again…

He told us that he bumped into the Audi at 30km/h, debunking claims that the incident was caused by speeding. Something much more technical is to blame for the incident – and the supercar owner is expecting to get a comprehensive answer within the next few days.

“We’re not sure exactly what happened. The car did jump as it slowed down, though. We suspect it was either brake failure, or that both the brake and accelerator were pressed at the same time. We expect to find that out from the diagnostics in a few days time.” | JP Van Der Spuy