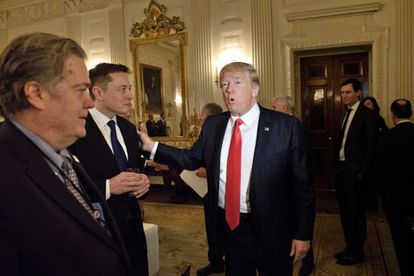 This is, objectively, quite funny: Donald Trump was on one of his trademark rallies last night, whipping the Alaskan crowd into a frenzy. However, amongst his rants about political correctness and transgender athletes, the former president took a moment to criticise Elon Musk.

The Pretoria-born billionaire recently pulled out of a deal to buy Twitter – a social media site that Donald Trump sees as direct competition for his ‘Truth’ platform. The $44 billion acquisition fell through, leaving Elon Musk in the lurch.

A row over how many fake accounts are actually present on Twitter seems to have been the main stumbling block. After weeks of stagnation, the plug was finally pulled over the weekend – and Trump himself called the deal ‘a terrible one’ for the world’s richest person.

Alas, his stinging rebukes didn’t just end there. Trump went on to call Musk a ‘bullshit artist’, following claims the tech whizz made about his voting record. Elon recently stated that he would vote Republican ‘for the first time’ during the 2022 Mid Term Elections in the US…

However, Trump told the people of Anchorage that Musk had actually voted for HIM in 2016. So who is telling porkies here?

Trump on Elon Musk: "You know, he said the other day, Oh, I've never voted for a Republican. I said, I didn't know that, he told me he voted for me. So he's another bullshit artist." pic.twitter.com/1cBiZsX1BJ

Donald Trump also took a moment to scoff at the threat of climate change, arguing that there are ‘bigger problems’ for people to address first. His whole take on global warming and rising ocean levels is that there will be ‘more beachfront properties’ to pick from.

Trump, speaking in Alaska, dismisses climate change and rising sea levels: "We have bigger problems than that. We'll have a little more beachfront property. That's not the worst thing in the world." pic.twitter.com/gXpjaE5pFn