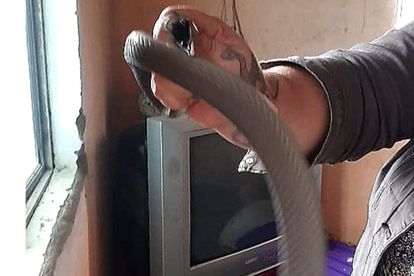 The snake was found hidden behind a TV stand in KZN – Photo: RUSA / Facebook

The snake was found hidden behind a TV stand in KZN – Photo: RUSA / Facebook

With all due respect to snakes, there are very few things we’d be less happy to see than a metre-long Black Mamba slithering around our living room. A family in Emona, KZN, got the shock of a lifetime this week, when the venomous reptile made an uninvited appearance.

When the family realised this wasn’t a 3D showing of Anaconda on ETV, they reacted in a heartbeat.

A plastic crate that was being used as a TV stand in the house also ended up serving as this snake’s humble abode. While congregated in the lounge, one family member noticed the creature as it slithered across the floor – and an emergency call was made immediately.

The professional snake-catcher, based nearby in KZN, was called out to attend the emergency. Upon her arrival, the Black Mamba was captured swiftly, and she removed the dangerous vertebrate from the home.

RUSA have since issued a statement on the matter, confirming a number of details about the incident. Although they are not trained snake handlers themselves, the officers wasted no time in deploying an expert to the scene. The Black Mamba has now been sent to a reptile park.

“A Black Mamba, measuring approximately 1.5 meters, was removed from a home in Emona, KZN on Tuesday. A resident contacted the Reaction Unit South Africa (RUSA) Tongaat Operations Center at approximately 12:39 after he noticed the snake in his living room.”

“Reaction Officers proceeded to the residence and on arrival located the reptile behind a plastic crate which was being utilised as a TV stand. Officers identified the snake as a Black Mamba. The snake will now be handed over to a local reptile park.” | RUSA statement