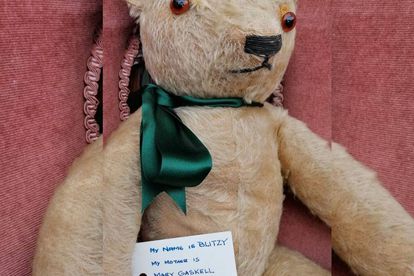 War survivor Blitzy the Teddy, complete with injured arm and wonky eye, survived the Manchester Blitz during World War II and was bought to comfort Mary Gaskell, who was only five when the conflict broke out in 1939.

When the sirens shrieked, air-raid wardens roared out their orders and a total blackout hit Lonsdale Avenue in Davyhulme, Manchester, where Mary lived, Blitzy came into his own, according to her sister-in-law Jackie Carey, 84, who lived in the same road at the time.

Now the long-forgotten 82-year-old teddy, recently found by Mary’s son in his Manchester loft ahead of a house move, is expected to set bear collectors’ hearts alight when it goes under the hammer at Hansons Auctioneers on 23 July.

“He’s got a face packed with a character, a couple of war wounds maybe, and his tummy squeak has given up the ghost, but he’s super special with a wonderful back story. Back in the 1930s he would have cost the equivalent of a week’s wages.”

“Mary was very lucky to own a bear of that quality and size at that time. Children hardly had any toys in the 30s. No wonder she treasured him all her life. Teddies have that effect on people. I still have mine.”

Blitzy was found with a note which read, ‘My mother is Mary Gaskell’ and ‘We cuddled through the Blitz’. The note was written by Jackie when she found Blitzy in a cupboard after Mary’s death in 2007 aged 74.

“Blitzy very nearly ended up in a skip or at the charity shop,” said Jackie, a retired teacher from Flixton, Manchester.

“Blitzy certainly has a fascinating mum with some famous connections. After surviving the Blitz, the skip, the charity shop and numerous house moves, he deserves a new chance of happiness. I hope we can find him the perfect new owner.”