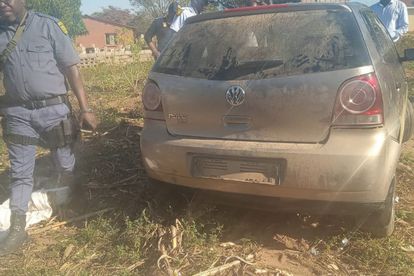 The police in Mpumalanga made a breakthrough in the investigation into the kidnapping and murder of an off-duty traffic officer, Thabao Mashego, on Friday night, 22 July.

The police visited the house in Agincourt near Busbuckridge where they found the vehicle and an elderly woman.

“At first, the elderly woman refused any knowledge of the vehicle however members were not derailed but continued and discovered that the vehicle was the VW Polo which was reportedly hijacked during the incident which took the life of the traffic officer,” said Mohlala.

The vehicle was inspected and its missing battery was found hidden inside the bedroom of the elderly woman’s 46-year-old son.

The woman, 72, and two of her sons were arrested for possession of a suspected stolen vehicle. However, the police may add more charges and further link them to the kidnapping and murder of Mashego.

“Apart from collaborating with members of the community, chances of winning the war against crime becomes a mammoth task. We really appreciate the community for playing their role through sharing of information with the police who swiftly acted. We trust that justice will be served for the victim’s family,” said Mpumalanga police commissioner, Lieutenant-General Semakaleng Manamela.

The three arrested suspects are expected to appear before the Mkhulu Magistrate’s Court imminently.