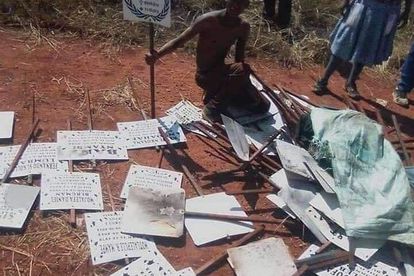 A nyaope boy has become the source of distress for many families who’ve failed to locate their loved ones due to missing grave markers.

Grave markers serve as headstones for many families who are unable to afford tombstones after burying their loved ones.
However, this nyaope boy has been making lives difficult for families because of the alleged theft of these grave markers.

ALSO READ: Two men and a woman caught in possession of nearly 100 packets of Nyaope

A community in Gauteng busted the nyaope boy with a sack full of steel grave markers which are believed to have been extracted from the local graveyard.

In the photograph, this suspect is forced to disclose the items inside the bag only to discover that its missing grave markers.

WHAT THE THIEF INTENDED TO DO WITH THE LOOT

According to comments on the social media post, the guy is believed to have been taking the markers to a scrap yard to weigh and sell.

Meanwhile in Police in Mount Road arrested six suspects yesterday, 18 September 2022 at about 22:00 after being caught red-handed on the premises of a scrap dealership in Deal Party.
This followed after members of a security company responded to an alarm that was triggered at the dealership premises.

“Police and the owner of the premises also responded to the scene. Inside the premises, the six suspects were caught red-handed getting ready to leave with a large amount of scrap copper,” said Captain Andre Beetge, police spokesperson.

“The six male suspects aged between 18 and 36 were arrested and charged for housebreaking business.”

He said they will be appearing before the Gqeberha Magistrates Court tomorrow, Tuesday, 20 September to face the charges against them.