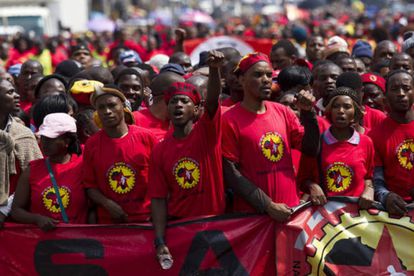 NUMSA has expressed its shock over the news of the murder of its member and shop steward Mahlomola Hlothoane. Photo: Abayomi Azikiwe / Flickr

NUMSA has expressed its shock over the news of the murder of its member and shop steward Mahlomola Hlothoane. Photo: Abayomi Azikiwe / Flickr

The National Union of Metalworkers of South Africa (NUMSA) expressed its disbelief on Sunday, 26 June, following the murder of one of their own. The victim is a Rustenburg shop steward from the Impala Platinum Mine.

Second shop steward at Implats murdered in a year

The victim, Mahlomola Hlothoane, is allegedly the second shop steward at Implats to be murdered within a year.

“This is the second NUMSA official who has been murdered for organising workers at Implats. Last year we buried comrade Malibongwe Mdazo who was assassinated in a similar fashion. His killers have not been found,”

In a statement released by NUMSA, Hlothoane was murdered by two unknown gunmen at his residential home in Rustenburg.

“He was murdered on Friday night at his home in Rustenburg by two unknown gunmen. We are deeply shocked and saddened as a trade union that we have lost a leader who was dedicated to the struggle of workers. We send our deepest condolences to his family who has lost a breadwinner and father,”

NUMSA said in a statement.

The Union believes the killing was linked to his trade union involvement. A request has been made for the police to intervene, reports TimesLIVE.

“We demand justice for these murders and we demand that the police must ensure that the community of Rustenburg, particularly in the immediate surrounding area of Implats, is safe for all who live there,”

In other murder-related news, it was previously reported that a 27-year-old man was handed two life terms for murders he committed in June 2017 and March 2018. Odirile Figland is from Winterveld in Tshwane.

Sitting at the Ga-Rankuwa Regional Court, the North West High Court also sentenced Figland to 27 to 85 years for other offences he committed. One of which is a count of attempted murder and two for the unlawful possession of a firearm. Figland applied for leave to appeal the ruling but this was dismissed by the court.

At a local tavern in Winterveld in June 2017, it is alleged that Figland got into an argument with some of the patrons. He reportedly fired three shots at Zonele Abrahams. Although two of the shots missed, one hit Abrahams. He died on the way to the hospital. Read the full story here.