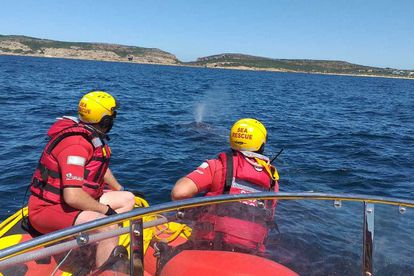 The National Sea Rescue Institute (NSRI) detangled a 7.5-meter sub-adult Humpback whale was found off-shore of The Waves, Plettenberg Bay with a fishing rope around the tailstock and trailing fishing gear on Wednesday.

SPECIALISED CUTTING EQUIPMENT WAS USED TO FREE THE WHALE

According to Jaco Kruger, SAWDN Plettenberg Bay coordinator the SA Whale Disentanglement Network (SAWDN) volunteers were activated following reports of a whale entangled in fishing rope off-shore of The Waves, Plettenberg Bay at around 09h17 on Wednesday.

“SAWDN volunteers launched aboard the NSRI Plettenberg Bay sea rescue craft Leonard Smith and on arrival on the scene a 7.5-meter sub-adult Humpback whale was found with a fishing rope around the tailstock and trailing fishing gear.”

Kruger said in a difficult and delicate disentanglement operation 2 kegging lines, with floatation buoys, were attached and the whale, with freedom of movement, was trailed while efforts to cut the fishing line using specialised SAWDN cutting equipment commenced.

“While the operation was underway an adult Humpback whale appeared and remained with the younger whale throughout the operation.

“The entangled whale led the sea rescue craft across the Bay towards the Beacon Island Hotel and out to sea before returning to the Bay.”

He said multiple cuts were made to the thick fishing rope and eventually in a final cut the rope fell away from the whale and the rope and the fishing gear were recovered for disposal.

“The two whales swam away and SAWDN is confident of the success of this disentanglement operation.”

The South African Whale Disentanglement Network (SAWDN) was established in 2006 in order to manage entangled whales using specialized equipment and is comprised of trained volunteers.

Kruger said to date a total of 209 have been assisted.

ALSO READ: Some KZN beaches still closed due to high levels of E-coli in the water