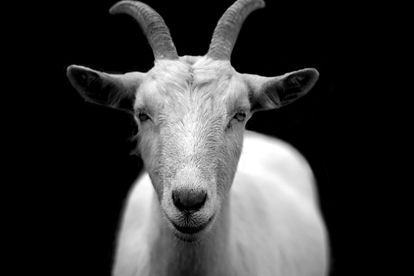 The NSPCA has been left outraged by the new track released by Mitchell weGqom in the name of the goat rapist.

Following a viral clip where villagers confronted shepherd Mamboyi for raping goats, music producer Mitchell we Gqom took advantage of the trend and created a song based on the incident.

While the song sparked humour among many, the NSPCA was not having it.

In a statement the NSPCA criticised the music producer.

“Earlier this week, the NSPCA came across various articles in the media regarding a goat rapist referred to as ‘Shepherd Mamboyi’.
Videos of Shepherd Mamboyi admitting to raping the goats to death are being widely spread across social media platforms such as Twitter.
To make matters worse, ‘Mitchell we Gqom’ has now released a music track in the name of the goat rapist using a remixed snippet of one of the videos wherein the goat rapist admits to raping the animals”.

This led to the NSPCA to ask, “would it be acceptable if Mitchell we Gqom, or any other music producer, remixed a video of a human rapist admitting to raping another human into a music track? Certainly not!”

“To make light of these acts of cruelty not only desensitizes the community but breaks down the morals of our community.
Sexual acts with animals is a criminal offence to which a man was sentenced to 8 years direct imprisonment only a few months ago,” the NSPCA warned.

THE DANGER OF RAPE CULTURE IN OUR SOCIETY

It went on to say any person who rapes another being, human or animal, is a danger to society.
“The NSPCA has shared, on countless occasions, that there is evidence that suggests that people who rape animals eventually go on to abuse other vulnerable members of society- children, the elderly etc.”
“The NSPCA is disgusted and outraged by Mitchell we Gqom’s irresponsibility, apathy and lack of foresight in respect of the implications of his production.
With his audience being the youth, his production exposes them to criminal acts with greater novelty. The NSPCA has seen an increase in child offenders in respect of sexual and violent crimes, with media such as this exacerbating an already inflamed problem”.

The NSPCA Special investigations unit is still trying to track down the whereabouts of shepherd Mamboyi.

“To date, the NSPCA only have a general region where the offender lives, but not an exact address. The NSPCA implores anyone with information regarding where Shepherd Mamboyi can be found to please report such directly to the NSPCA at .cialinvestigations@nspca.co.za”.

“This apathy that is spread through our communities is a cancer that must be cut out decisively. Animal cruelty is a crime, any portrayal to the contrary is grossly unjust! ”