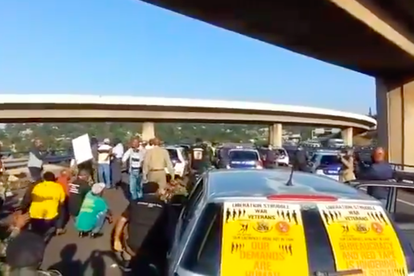 A group of angry uMkhonto we Sizwe (MK) military veterans who are on their way to deliver a memorandum of demands to the provincial legislature in Pietermaritzburg blocked the N2 and N3 freeways near Durban on Wednesday.

A video of scores of MK veterans protesting on the freeway is doing the rounds on social media. The video depicts the veterans’ vehicles parked on the freeway and protestors crouching and singing on the road, with traffic backed up behind them. The protestors eventually moved on driving at 40km per hour in convey as they head to the KZN Legislature in Pietermaritzburg.

“According to my knowledge they are supposed to go to Pietermaritzburg to submit a memorandum of demands. The government has made a lot of promises to us but they failed to meet our demands,” Cele said.

The veterans had earlier demanded improved living conditions, jobs, housing and medical care from the government.

The MK veterans had also called for the government to integrate former combatants into the country’s various law enforcement agencies. This included the SAPS, SANDF, metro police, Correctional Services, SA Secret Service, and the country’s Border Management Agency. They had also previously demanded employment in state owned enterprises, such as Transnet, Eskom, SAA and Prasa.

Citing the Military Veterans Act the veterans earlier said that they also wanted the government to provide them with business and empowerment opportunities.

uMkhonto we Sizwe was the armed wing of the African National Congress during the struggle against apartheid.  For SA president Nelson Mandela co-founded the organisation following the Sharpeville massacre. Their aim was to fight against the former apartheid regime that ruled the country.