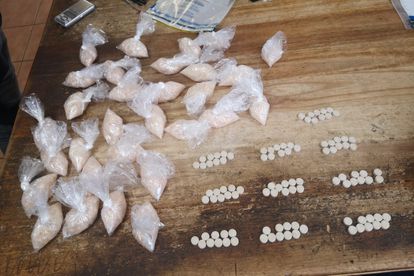 WHEN WAS THE ARREST MADE?

According to police spokesperson Captain Olebogeng Tawana the arrest was executed on Thursday, 24 February 2022, following an intelligence-led operation.

THE NARCOTICS DOG REACTED POSITIVELY DURING THE SEARCH

The Kimberley K9 Narcotics dog “Eddie” reacted positively during the search and directed its handler to the pillow.

A 22-year-old female was arrested and charged with dealing drugs. She is expected to appear in the Kimberley Magistrate’s Court on Friday, 25 February 2022.

The Northern Cape Provincial SAPS Management commended members involved in the operation, which resulted in the arrest of the suspect.

ANOTHER SUCCESSFUL BUST IN THE NORTHERN CAPE

Meanwhile, a 33-year-old man in Pampierstad was also arrested on an unrelated charge of dealing drugs.

WHAT HAPPENED DURING THE ARREST?

“The man’s residence was searched, and crystal meth with an estimated street value of more than R7000 was found and confiscated included cash to the value of R25000, which is believed to be the proceeds of drug dealing.”

The Station Commander of Pampierstad, Lieutenant Colonel Selebilekgosi Morebodi commended members for acting promptly on intelligence, which resulted in the arrest of the man.

ALSO READ: Two nabbed in Northern Cape for the possession of explosive