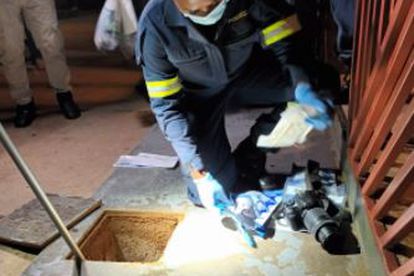 Several people were arrested by the Northern Cape police for various crimes during recent operations in the Frances Baard District.

WHAT INFORMATION DO WE HAVE ABOUT THE OPERATIONS?

According to police spokesperson Captain Olebogeng Tawana, the arrests were made during a high-density clandestine operation executed over the weekend.

RAIDS WERE ALSO EXECUTED IN THIS DISTRICT

“High police visibility in the Frances Baard District through blue light patrols deterred and prevented criminal activities, compliance inspections. These inspections were conducted at 110 liquor outlets during which 383 patrons were searched, 129 houses were raided, including 153 vehicles, 15 dangerous weapons, including knives, were seized during the operation, traffic and other fines were issued to motorists, including those who were drinking liquor in the streets.

Mandrax tablets and cash believed to be the proceeds of drug dealing was found in possession of a husband and wife of a well-known tavern and taxi owner in Pampierstad on Saturday,12 March 2022.

In Pampierstad, two people were arrested at their residents, respectively and police confiscated more than 100 Mandrax tablets, crystal meth, a suspected stolen laptop, cellphones, and money believed to be the proceeds of drug dealing.

In Roodepan, two men and a woman were arrested following a raid and search at their premises. They were found in possession of Mandrax tablets and cash.

“Of the suspects arrested in Galeshewe and Kagisho were also found in possession of drugs, including dagga, Mandrax, and crystal meth,” Tawana said.

Meanwhile, in Naborn in Roodepan, Brig Hennie van Rensburg and members destroyed a dagga plantation at a house in Naborn in the Roodepan.

“Both the  District Commander of the Frances Baard District, Major General Bean, and the Acting Deputy Provincial Commissioner for Policing, Brigadier Hennie van Rensberg praised the members who were involved in the Clandestine Operation for the professional and disciplined manner in which they executed the actions.”

The arrested people, aged between 25 and 54, are expected to appear in different courts in the Frances Baard Districts respectively on Monday, 14 March 2022.