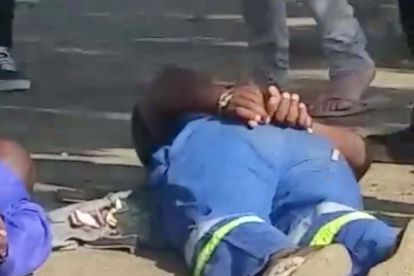 Four suspects were arrested and one severely injured in a shootout at a North West liquor store on Wednesday. Photo: Screenshot

Four suspects were arrested and one severely injured in a shootout at a North West liquor store on Wednesday. Photo: Screenshot

Police in the North West province have arrested four suspects with one injured after a failed robbery took place at a liquor store in Brits on the morning of Wednesday 23 September.

A group of five armed men stormed the business and injured the store owner, but police were able to get to the scene quickly and prevent them from carrying out the robbery.

The suspects were captured on video being apprehended by police, with blood having been spilled in the shootout.

North West police apprehend five, one on the run

One suspect was able to flee the scene on foot as police engaged in a shootout with the perpetrators. One of the suspects was wounded in the melee and is currently under police guard in a local hospital. A case of business robbery has been opened.

“We can confirm that a case of business robbery is being opened at Brits police station subsequent to an incident that took place on Wednesday,23 September 2020,” she said.

“According to information received, it is alleged that five suspects driving a silver VW Polo stormed inside a local liquor outlet at De Wet Street in the Brits Central Business Area.”

Botma said that the owner of the store had sustained minor injuries during the raid after jumping out of the window to escape, and she said that the responding police officers found ammunition and a firearm at the scene, which were confiscated. Police are continuing to search for the fifth suspect.

The matter is still under investigation and the arrested suspects are expected to appear before Brits Magistrate’s court in the coming days.