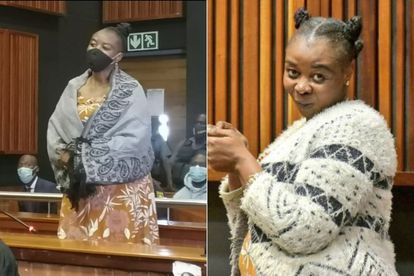 Convicted killer Nomia Rosemary Ndlovu is back in court for allegedly plotting to kill to police officers. Photo: @NPA_Prosecutes and @MrMhla2U / Twitter

Convicted killer Nomia Rosemary Ndlovu is back in court for allegedly plotting to kill to police officers. Photo: @NPA_Prosecutes and @MrMhla2U / Twitter

Former police officer and convicted killer Nomia Rosemary Ndlovu is expected back in court on the morning of Wednesday, 20 April. Ndlovu will be facing charges of plotting to murder two police officers

Ndlovu will be appearing before the Kempton Park Magistrate’s Court. She is currently facing charges of plotting the murder of Colonel Nthipe Boloka and Seargeant Benneth Mabunda. Mabunda was the investigating officer in her case.

Boloka was the station commander of the police station where Ndlovu worked. In 2021, Ndlovu was handed six life sentences by the Palm Ridge High Court. The charges against her were attempted murder, murder, fraud and defeating the ends of justice.

Who did she have murdered and when?

Ndlovu reportedly killed six members of her family in order to benefit from insurance claims. The value of the claims was more than R1.4 million. She was found guilty of the murders of:

Ndlovu was arrested in 2018. This followed a sting operation which led to her being caught on camera detailing what she wanted hitmen to do when they killed her sister and five children.

One of the hitmen was an undercover officer known as Mr Dlamini. In a secretly recorded video, Ndlovu is seen and heard telling Mr Dlamini how to kill her sister Joyce. She further told Mr Dlamini to not leave behind any witnesses so that she would be able to cash in on insurance policies.

Former Tembisa police officer Nomia Rosemary Ndlovu is set to face a judge once again in April, just months after she was convicted for orchestrating a number of killings on some of her family members, in a case that had all of us glued to the screen!

Ndlovu cashed in R1.4 million from life insurance policies she had taken out on six people. The South Gauteng High Court in Johannesburg, sitting in the Palm Ridge Magistrate’s Court, sentenced Rosemary Ndlovu to six life imprisonment terms in November 2021 for the killings. Read the full story here.