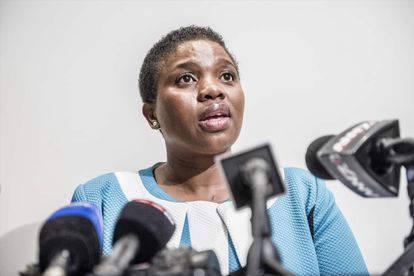 Nomgcobo Jiba, the axed Deputy National Director of Public Prosecutions, has stated her intentions to challenge President Cyril Ramaphosa’s decision to fire her. The President made this decision on the basis of the recommendations listed in a report compiled by retired Constitutional Court judge, Yvonne Mokgoro.

Jiba and her senior, Lawrence Mrwebi, were suspended by the president after it had been alleged that their conduct in their respective positions, had brought the National Prosecuting Authority (NPA) into disrepute.

She was one of four national NPA heads, responsible for the National Prosecution Services portfolio.

As reported by Business Day, Jiba was accused of nepotism, defeating the ends of justice by protecting her close allies — such as former president Jacob Zuma — from prosecution, and firing former KwaZulu Natal Hawks head, Johan Booysen, for no apparent reason.

In her report, Mokgoro criticised Jiba’s “lack of conscientiousness in considering the reputation of the NPA” before her own.

The inquiry found that Jiba, as well as Mrwebi, had not acted without fear or favour.

Refusing to accept Jiba’s plea deal of and acting under the recommendations of the report, Ramaphosa followed through on his word and axed the two NPA heads.

Jiba vows to fight back

However, the former deputy NDPP is poised to fight back against the ruling. She described the president’s actions as an abuse of executive powers and warned that her lawyers would do everything in their power to challenge his decision.

“I can assure the president that I will not be stripped, by executive stealth and fiat, of my rights routinely accorded to all citizens to serve this great country in the position of my calling.

“The president’s decision to declare me a prohibited public servant will not stand judicial scrutiny because it is self-evidently wrong amounts to an abuse of executive power, alternatively a failure to properly exercise that power,” she said in a scathing response to the letters of dismissal Ramaphosa had sent to her and Mrwebi.

“This is for ambitious black women of South Africa” – Jiba

Jiba vowed to fight back, for herself as well as the “the black women of South Africa with ambition to become the best in any field.”

She expressed her enthusiasm for the next part of the process, which includes a Parliamentary delegation on Ramaphosa’s decision.

“I have consulted my lawyers and have the assurance of their service in taking the matter forward. For now, and upon the resumption of the sixth parliament, the decision of the president must receive the attention of the legislature, which has the last word on my fate,” she said.

The decision of the president may be binding but it is not final. The matter has to be tabled in Parliament within 14 days of the decision.

Mrwebi would not be drawn into commenting on the president’s decision. He noted that he would only state his intentions once the matter has been concluded in Parliament.