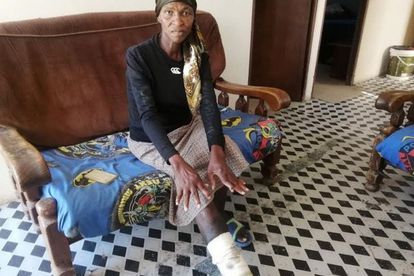 Nocawa Maneli, who has an injured leg from a dog bite years ago, depended on the Covid-19 grant. Now she depends on the kindness of relatives. Photo: Mkhuseli Sizani

Nocawa Maneli, who has an injured leg from a dog bite years ago, depended on the Covid-19 grant. Now she depends on the kindness of relatives. Photo: Mkhuseli Sizani

By Mkhuseli Sizani for GroundUp

Nocawa Maneli, 58, no longer buys vegetables. She says she can’t afford to, since the R350-a-month COVID-19 grant on which she depended came to an end in March.

Maneli, from Missionvale in Gqeberha, lost her job as a domestic worker during the start of the lockdown. The COVID-19 grant, she says, was small, but made “a huge difference”.

“I used to have a cup of tea and porridge in the morning, rice and vegetables for supper; sometimes vetkoek and baked bread with tea or rice mixed with potatoes in one pot with a drop of cooking oil.”

“The food would last me two weeks. Then I would have to call my relatives to bail me out until I receive my next grant ,” she said.

Now, she says, she depends entirely on her relatives. “I eat stiff pap with imana soup or sometimes eat it with rice.” She eats meat once a month when her relatives buy her some.

NO SOURCE OF INCOME

Occasionally, she says, her neighbour Tembeka Zingela has vegetables, and then “if I have bread flour, we cook dumplings mixed with her vegetables”.

But Zingela too is battling without the COVID-19 grant.

“The R350 grant has been our source of income for me and my boyfriend. Both of us were receiving it. It made a huge difference in our lives because he lost his job in 2014 and since then he has been unemployed. I lost my job at the start of the lockdown. I was working three days as a domestic worker.”

Now Zingela, 56, and her boyfriend have to rely on relatives who give them R100 a month each to buy food, and on the Missionvale Care Centre’s soup kitchen.

“We only buy 5kg of rice, mielie meal and bread flour. Then we go three times a week to the soup kitchen to get bread and soup. When we go there we don’t cook; we save the little food we have. We eat half of the bread with soup and share the other half with our two dogs and cat.”

The couple also collect soft drink containers, tins and cardboard boxes from neighbours for recycling at the Care Centre. In exchange, they get samp, rice and mielie meal to cook at home.

In her budget speech on 24 May, Minister of Social Development Lindiwe Zulu said that the government’s COVID-19 relief measures had reduced the percentage of households living below the food poverty line of R561 a month from 20.6% to 18.8%. In the absence of these measures, she said, this percentage would have grown to more than 32%.

When she was working, Maneli used to buy a packet with a banana, an orange and an apple for R10. Then when she lost her job she relied on one of the pig owners in the area who would bring her some of the bruised fruit from the stalls where he collects food for the pigs.

“But since winter has started it has been hard to get fruit. The last time I had an orange was last week on Monday given by one of the neighbours.”