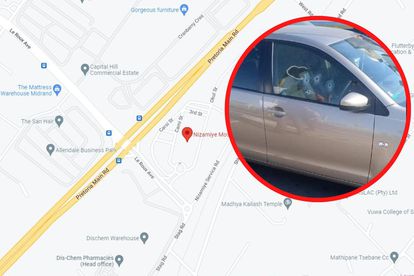 A nine-year-old boy was killed and his mother critically injured after two men opened fire on their vehicle in broad daylight while sitting in traffic in Midrand on Tuesday.

THE NINE-YEAR-OLD BOY WAS SHOT IN HIS CHEST

A 13-year-old girl sitting in the back seat was not injured, but she witnessed how her mother was BRUTALLY shot in her FACE and body while her brother was shot in his chest and killed.

According to Netcare 911 spokesperson Shawn Herbst, they responded to the scene at around 15:00 on Tuesday.

The shooting happened at an intersection outside the Turkish Mosque off Pretoria Main Road in Midrand.

“Reports indicate that a mother sitting in her car with her 9-year-old son had been gunned down while waiting for the traffic lights.

“The mother, believed to be in her mid-thirties, had sustained two gunshot wounds to her body and was found in a critical condition.”

HIS MOTHER WAS SHOT MULTIPLE TIMES

He said the young boy who had been sitting in the front passenger seat had sustained a gunshot wound to his chest.

“The daughter, aged 13, who had been sitting in the back seat, was not injured.

“The boy was rushed by members of the public who had witnessed the event to a clinic situated in the Mosque, however was declared deceased on arrival of paramedics.”

According to Herbst, the mother was treated on scene by Netcare 911 emergency care practitioners, who managed to stabilise her.

THE DAUGHTER SEATED IN THE BACK WITNESSED THE BRUTAL SHOOTING

“Due to the serious nature of her injuries, the patient was flown by Netcare 911 helicopter ambulance to a specialist medical facility for the care she required.

“Circumstances leading up to the incident will be investigated by the SAPS who were on scene.”

Gauteng police spokesperson Lieutenant-Colonel Mavela Masondo said the mother had just picked up her children from school not too far from where the shooting happened when two men approached them.

The two suspects shot at them and then jumped into a parked nearby car and sped off.

The motive for the shooting is unknown at this stage. However, a case of attempted murder and murder has been opened for investigation.

Police have requested anyone who might have information that can assist the police in apprehending the suspects to call the nearest police station or the Crime Stop number 08600 10111.