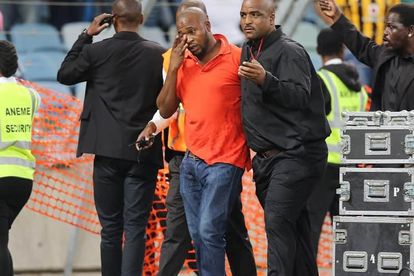 South African Police Services (SAPS) have confirmed that nine people have been convicted of public violence following the chaotic scenes that occurred after the Nedbank Cup semi-final at Moses Mabhida Stadium in April.

Kaizer Chiefs were knocked out of the competition after losing 2-0 to eventual champions Free State Stars, which prompted scores of angry fans to storm the pitch, causing damage worth R2.6 million.

The SAPS issued out a statement on Thursday, revealing that nine of the 11 suspects who appeared in the Durban Regional Court in connection with the incident were successfully convicted.

“The case against two of the accused was provisionally withdrawn. Siphesenkosi Knowledge Memela, John Sibongiseni Khumalo, Kwezilomo Madiba, Cebolenkosi Hadeben, Douglas Mhlaliseni Mkhize, Nolwethu Cokotha, Zibongile Njova, Sihle Duncan Zungu and Denis Thusi were convicted for public violence and are to be sentenced on 12 December 2018 after the probation officers report is presented to court.”

The incident left 18 people injured, with six admitted to hospital, and the match result prompted Steve Komphela – who coached Kaizer Chiefs at the time – to resign from his post after a tumultuous tenure where the club failed to secure silverware in three years.

The club was fined by the PSL, and was forced to stage two home matches at the venue – against Polokwane City and Chippa United -behind closed doors.

Should a similar incident occur in the next 24 months, Amakhosi will have to play another home fixture without any crowd support, as per PSL sanction.