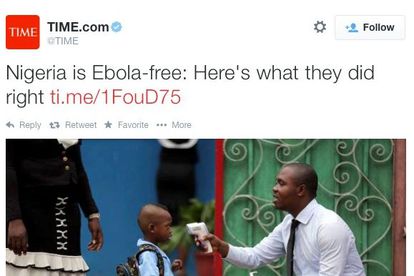 A statement from the organization headlined “Nigeria is now free of Ebola virus transmission” reads:

“The lines on the tabular situation reports, sent to WHO each day by its country office in Nigeria, have now been full of zeros for 42 days. WHO officially declares that Nigeria is now free of Ebola virus transmission.

“This is a spectacular success story that shows that Ebola can be contained. The story of how Nigeria ended what many believed to be potentially the most explosive Ebola outbreak imaginable is worth telling in detail. Such a story can help the many other developing countries that are deeply worried by the prospect of an imported Ebola case and eager to improve their preparedness plans. Many wealthy countries, with outstanding health systems, may have something to learn as well.”

Ebola’s ravaging of West African countries like Liberia and Sierra Leone and its recent outbreak in Texas has generated global panic and hysteria. Some infected healthcare workers who were administered a vaccine that is yet to undergo full clinical trials have recovered, The unavailability, however, of any true and tried treatment or vaccine has made the Ebola epidemic a cause of anxiety. In light of these facts, Nigeria’s successful curtailment of the disease is cause for hope and excitement, not only for that country, but for others as well.

In July we reported on the panic generated by Nigeria’s index case, where Patrick Sawyer, an American-Liberian lawyer infected with the virus died in Lagos, Nigeria’s commercial city. Upon arrival from Liberia, where he had taken care of a sick Ebola relative, Mr. Sawyer collapsed in the airport. He was rushed to hospital, where he was initially treated for malaria. He died some days later. Mr. Sawyer was diagnosed of Ebola some days before his death.

Dr. Ameyo Adadevoh, the consultant who treated Sawyer, was instrumental in preventing Ebola from becoming an epidemic in Nigeria. Dr. Adedevoh placed Mr. Sawyer in quarantine and refused to discharge him despite pressure from high quarters. She was reported to have contacted Ebola on August 4, 2014, and died from the disease on August 19, 2014.

Lagos is Africa’s most populous city, and for a disease outbreak of this dimension it was a powder keg waiting to explode. The explosion, however, never occurred. According to Scientific America, Nigeria’s success was based on the following:

“The swift battle was won not only with vigilant disinfecting, port-of-entry screening and rapid isolation, but also with boot leather and lots and lots of in-person follow-up visits, 18,500 of which were undertaken to find possible new cases of Ebola among a total of 989 identified contacts. Such ground-level work may sound extreme: even the usually measured WHO declared the feat ‘a piece of world-class epidemiological detective work.’”

Nigeria’s effective public health response hinged on an existing Incident Management Center established for Poliomyelitis which was deployed for Ebola management. According to the Centers for Disease Control:

Directly linked to the contact tracing was the Social Mobilization strategy. This included teams of three social mobilizers who were trained and deployed to conduct house-to-house, in-person visits within specific radii of the homes of the Ebola contacts. For high-density areas, house-to-house teams covered a 500m radius, 1km in medium density areas and 2km for low density (7). As of September 24, approximately 26,000 households of persons living around Ebola contacts had been reached with house-to-house visits in Lagos and Rivers states.

Providing information for all

Besides the epidemiological response, some Nigerian professionals used social media for information dissemination. One such initiative was the Ebola Alert, “an evidence-driven group of volunteer professionals working on Ebola Virus Disease Interventions”. They used a Twitter feed to keep people informed and dispel rumors, as rumor-mongering can be devastating in a crisis like this.

The Lagos State government plans to send health professionals to Sierra Leone to aid in the containment of the Ebola Virus Disease there. Nonetheless, Nigeria should not rest on this current certification from WHO of being Ebola free. Nor should we get caught up in petty squabbles such as the one between the Federal Ministry of Health and the Lagos State Government over who deserves credit for Nigeria’s containment of the disease.

The prize of freedom is eternal vigilance. Ebola is not dead until it is eradicated from all parts of the globe and can no longer pose a threat to humanity.

Words by Nwachukwu Egbunike of @feathersproject

This article originally appeared on http://globalvoicesonline.org/