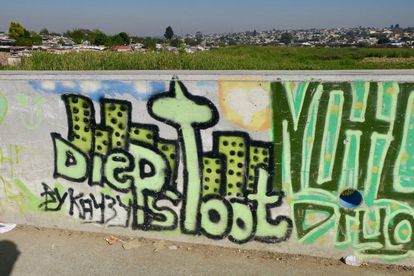 Operation Dudula leader Nhlanhla Lux has been accused of hijacking the Diepsloot protest. Community leaders spoke out about Lux after he visited the area on Wednesday, 6 April.

Lux made his way to Diepsloot on Wednesday afternoon. This follows ongoing protests regarding uncontrolled crime. The Minister of Police and National Commissioner were also in Diepsloot.

The pair have vowed to increase police presence in the area and put an end to the rampant crime. Operation Dudula has been making national headlines after members have been campaigning against undocumented foreign nationals.

A frustrated community leader refers to Lux as a ‘hijacker’

Diepsloot community leader Andrew Malaka spoke about Lux. He shared that Lux is allegedly confusing members of the community as he made his way over from Soweto to take a look at what is happening.

Malaka referred to Lux as a ‘hijacker’. He believes that Lux made his way to Diepsloot after finding out about the protests on through the media.

“I think he’s seen it in on the then he takes that advantage to come here and check what we’ve agreed with the community. So this is what I call him a hijacker because from yesterday [Tuesday] he was not here, from today [Wednesday] in the morning he was not here. He came today after he was seen on the news. He wanted to hijack, to be popular with this thing.”

eNCA reports that Malaka shared that the protests are for the community and have nothing to do with anyone outside of the Diepsloot community.

“He [Lux] hijacked what the people of Diepsloot are fighting for. We are not fighting for anything besides the service delivery in Diepsloot,” said Malaka

One killed in mob justice attack, after demand ‘to see passports’

Tensions have reached fever pitch in the Gauteng settlement of Diepsloot overnight, after a man was murdered in an apparent mob justice attack. The victim has been named as Elvis Nyathi.

Protests have erupted in this part of the province, and locals say they are gatvol with high crime rates and large numbers of undocumented migrants. Operation Dudula leader Nhlanhla Lux arrived in Diepsloot on Wednesday, and his presence did very little to calm the rising tides of anger.

Over the weekend, seven people in the township – all believed to be South African nationals – were killed following an outbreak of violence. The community has been balanced on a knife-edge ever since, and Police Minister Bheki Cele visited the area yesterday. But his presence didn’t intimidate some lawbreakers. Read the full story here.