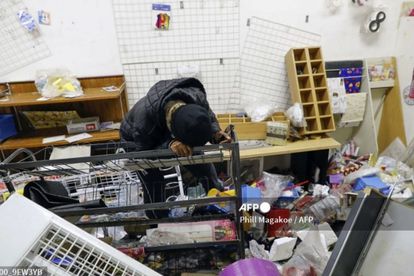 Thandi Johnson, a shop owner, wheeps inside her looted store at the Diepkloof Square area in Soweto, Johannesburg on July 13, 2021.

Thandi Johnson, a shop owner, wheeps inside her looted store at the Diepkloof Square area in Soweto, Johannesburg on July 13, 2021.

Former Ukhozi FM radio DJ has been arrested. The alleged instigator handed himself over to police at the Durban Central police station on Monday, 19 July following allegations of inciting violence and anarchy in KwaZulu-Natal (KZN).

His online radio station confirmed on their Facebook page that he is indeed arrested however it is not yet clear what he was charged for.

RAMAPHOSA GIVEN 3 DAYS TO RELEASE ZUMA

During his address on Sunday 11 July he said that uBaba (referring to Zuma) always says umuntu akalahlwa (which means you can’t discard a human as you would to an animal or give up on a human being). I am very saddened by the fact that an 80-year-old freedom fighter is in prison my fellow African.

“I fear what is going to happen in this country if our President is not released from prison within 3 days, starting from today (Sunday, 11 July). Cyril Ramaphosa, Judge Raymond Zondo, the time for the meetings you are holding is over, release Zuma from prison, or hell will break lose,” he said.

Meanwhile, two of the suspects arrested in connection the unrest that took place in parts of Gauteng and KwaZulu-Natal (KZN) were set to appear in court on Monday, 19 July 2021.

One of the suspects will be at the Randfontein magistrate’s court while the other will appear at the Westonaria magistrate’s court. A third suspect who was also handcuffed is only expected in the dock on Tuesday.