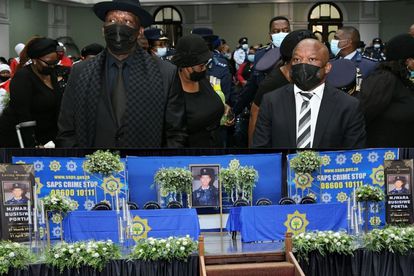 The funeral of Sergeant Busisiwe Mjwara was held on Firday. She died during an operation for three victims of the KZN floods. Photos: Supplied/KZN Government

The funeral of Sergeant Busisiwe Mjwara was held on Firday. She died during an operation for three victims of the KZN floods. Photos: Supplied/KZN Government

It was a sombre occasion on Friday as another face was put to the otherwise cold death toll of 435 following the KZN floods. Her name is Busisiwe Mjwara, a 42-year-old police sergeant from the Hilton K9 search and rescue unit. Although she was more than that, Mjwara was the wife to Ngwelezane and the mother of Sinazo and Aphelele.

Her journey ended on 17 April as she drowned in the Msunduzi River during a search and rescue operation for three victims of the floods.

Mjwara was laid to rest on Friday at the Pietermaritzburg City Hall where KZN Premier Sihle Zikalala gave a special tribute.

There was a mixed atmosphere amidst the field of grievers, government officials and uniformed colleagues who mourned the loss of Mjwara while celebrating her life.

Zikalala cut through it all when he began his special tribute with:

“The ancients might have had our dearly departed sister in mind, Sergeant Busisiwe Mjwara, when they stated that; those whom the gods love, die young. Departing this world of the mortals in her early forties, Mjwara was in the prime of her life and had just begun to blossom for our nation to bask in her success and glory,”

Mjwara took her final breath clad in her uniform and with boots on, something that Zikalala said should inspire the country.

“She opened our eyes as a nation that the men and women in blue are the unsung heroes of our people and guardians of our freedom. Mjwara passing on while serving our nation is the ultimate cross she could bear for our society which is sometimes found to be numbed to the suffering of others. Her death is a poignant reminder that every person who lost his or her life is not a mere statistic,”

She was one of only two female divers in her unit and her colleagues called her fearless. Many regaled tales, one of which was how at the beginning of her career she was young and fearful as she knew the risks but she then fell in love with it.

Police Minister Bheki Cele delivered the eulogy where he began by calling Mjwara an inspiration for future generations.

“She should be celebrated, police divers are specialised units who bring the much-needed closure to families that lost their loved ones. This is exactly what she was attempting to do when she met her untimely end, an act that we will never forget and will remain forever indebted. We have lost a dedicated and brilliant asset that comes at a time when our nation desperately needs people like Sergeant Mjwara.”