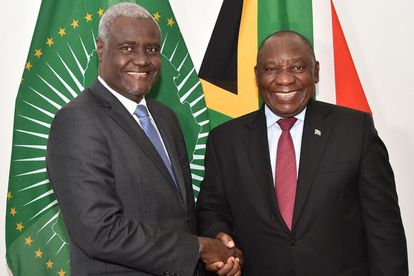 In a move to bolster solidarity with SA, the African Union donated over R2 million towards relief efforts following the recent KZN floods. Photo: Flickr/GovernmentZA

In a move to bolster solidarity with SA, the African Union donated over R2 million towards relief efforts following the recent KZN floods. Photo: Flickr/GovernmentZA

In the destructive wake of the recent floods in KZN, the African Union (AU) has donated about R2.3 million towards relief efforts in a move to bolster solidarity. The death toll sits at over 400, with no less than 16 672 households and 116 708 people being affected.

The chairperson of the AU, Moussa Faki Mahamat, expresses his full solidarity and renews his sincere condolences to the affected families, the Government and the people of South Africa.

“The devastating floods in KZN has left hundreds of people dead and caused massive destruction of homes and infrastructure. In this regard, we are making a donation of $150 000 from the AU Emergency Fund in support of the South African Government’s response and rescue efforts,”

He added that the AU reaffirms the unwavering support of and solidarity with the citizens of South Africa during the difficult time.

The AU is a continental body consisting of the 55 member states that make up the countries of the African Continent.

“I’m deeply saddened by the loss of life and damage as a result of the flooding in the province of KwaZulu-Natal, South Africa, and offer my condolences to the families of the victims. The UN stands ready to support,”

Queen Elizabeth II and 14 other Commonwealth monarchs in a statement said they stood in solidarity with South Africa.