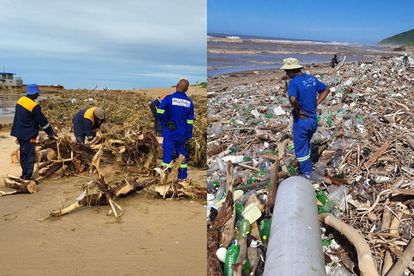 Over 40 000 bags of litter were collected over Easter weekend at beach clean-ups following recent floods in KZN. Photo: Supplied/eThekwini Municipality

Over 40 000 bags of litter were collected over Easter weekend at beach clean-ups following recent floods in KZN. Photo: Supplied/eThekwini Municipality

Thousands of bags were filled by the eThekwini Municipality with refuse and debris following clean-ups at Durban beaches. The beaches were littered after the province experienced days of unrelenting downpours that have caused ongoing challenges for the government and residents.

BEACHES STAY CLOSED BUT YOU CAN JOG ALONG THE PROMENADE

“Tons of litter and debris that washed down from rivers have already been collected from the seashore. Beaches will remain closed until the quality of water has improved to permissible standards. Bathing, swimming, fishing, and recreational and sporting activities at beaches and rivers are still not allowed in eThekwini,” he said.

However, the people of eThekwini can still enjoy activities such as jogging, walking, running, yoga, and other exercises on the promenade.

OVER 40 000 BAGS OF LITTER OVER FOUR DAYS BY ETHEKWINI

Mayisela said the clean-ups began on Easter Friday and lasted throughout and after the holiday period. The Springfield dumpsite and skip by Laguna Beach were used for the disposal of the mountainous mound of bags.

Mayisela said eThekwini continued their clean-up work on Monday with another 300 bags of litter from Bluff beaches and 1 500 bags collected from the Durban beachfront.